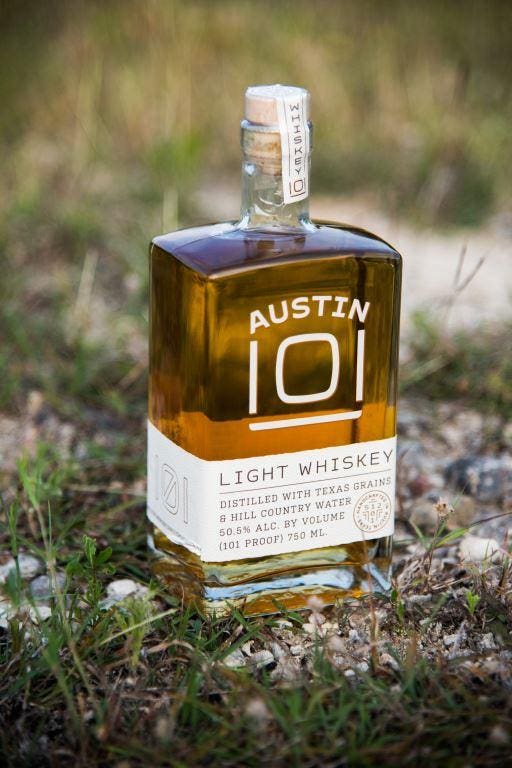 “That was on March 7,” recounts Godevais. “There were about 1,000 people at the festival, and we got second place out of 62 known products and 25 brands.”

But then, two weeks later, COVID-19 hit, and bars and restaurants were shut down during stay-at-home orders. “It was a really interesting timing for things,” Godevais says. “We always try to have a positive view of things. Though it was unlucky that we had launched a product within two weeks of the stay-at-home orders, we were somewhat luck that the Texas Whiskey Festival went through.”

Right after the festival, Austin Craft Spirits received their first order from their distributor.  “Because of that second-place award, they ordered five times more than their original order,” Godevais says. “If (the pandemic) had happened before the Texas Whiskey Festival, we’d be in a different place.”

Promoting a new spirit during a pandemic has been challenging. “Not being able to do on-premise tastings has hurt the craft industry,” Godevais says. “People have continued to buy spirits, but they maybe only buy things that they already know.”

For Austin Craft Spirits, it’s not just introducing the whiskey, but it’s also educating consumers what a light whiskey is. “It’s a very broad category,” Godevais says. “Bourbon has very stringent rules that make a bourbon a bourbon, and you cannot deviate from those rules. Light whiskey has only one rule: the distillate has to be pulled from the still above 160 proof and below 190 proof.”

Austin Light Whiskey is 50.5 percent alcohol by volume. “What’s interesting in our case is that we did not set out to make a light whiskey, we set out to create a very specific flavor profile, and it just happened that it fit into that legal classification,” Godevais says. “There are many different light whiskeys, and probably none of them taste like Austin 101.”

Austin 101 is made from purely Texas-grown ingredients, and the water is hill country water. Its smooth flavor appeals pretty equally across the gender lines, and it is aged in a mix of bourbon and whiskey barrels. “The aging process is different in Texas than in Kentucky, and we have 30 degree temperature swings that crates a flavor extraction in a completely different way than other whiskey regions in the United States,” he says.

To keep reaching out to establish a customer base, Austin Craft Spirits recently redesigned their merchandizing, and they’ve been quite active on social media.  “We are partnering with other organizations that have tasted and liked our product,” he says. “It’s a little thing, but we also just added a medallion to put around our whiskey bottles to give it more shelf appeal and to show the people’s choice award.”

One of the main reasons the company has been succeeding is because of the founders’ initial business plan. As all three of them initially worked in the tech industry, they are driven by innovation and also by running their business in a non-traditional way. “We kept our capital investment fairly low,” Godevais says.

Instead of investing in equipment, they rent equipment from other craft distillers who are not running at capacity, but they do have their own aging facility so they can properly age their whiskey and then bottle it as soon as it reaches the flavor profile they desire. “We have a very nimble business model so we’re able to weather longer periods of time when sales are not going as well as we’d hoped,” Godevais says.

Right now, though, the focus is on figuring out how to do tastings in a safe manner, and the company is working with the Texas Alcoholic Beverage Commission to determine a new way to do in-person tastings. “We’re also partnering with charitable organizations to do virtual tastings,” he says. “What we’ve learned is the number one thing we can do to help retailers move our product is for people to taste it, and then the tasting experience converts to sales.”

48 hours in . . . Barcelona, an insider guide to Gaudi’s playground
Is the world turning its back on US tourists?
How One Company Is Boosting Caribbean Food Security Through Climate Resilient Greenhouse Systems
Face shields AND face masks now mandatory on Qatar Airways
48 hours in. . . Valencia, an insider guide to the city of paella, playas and pyrotechnics