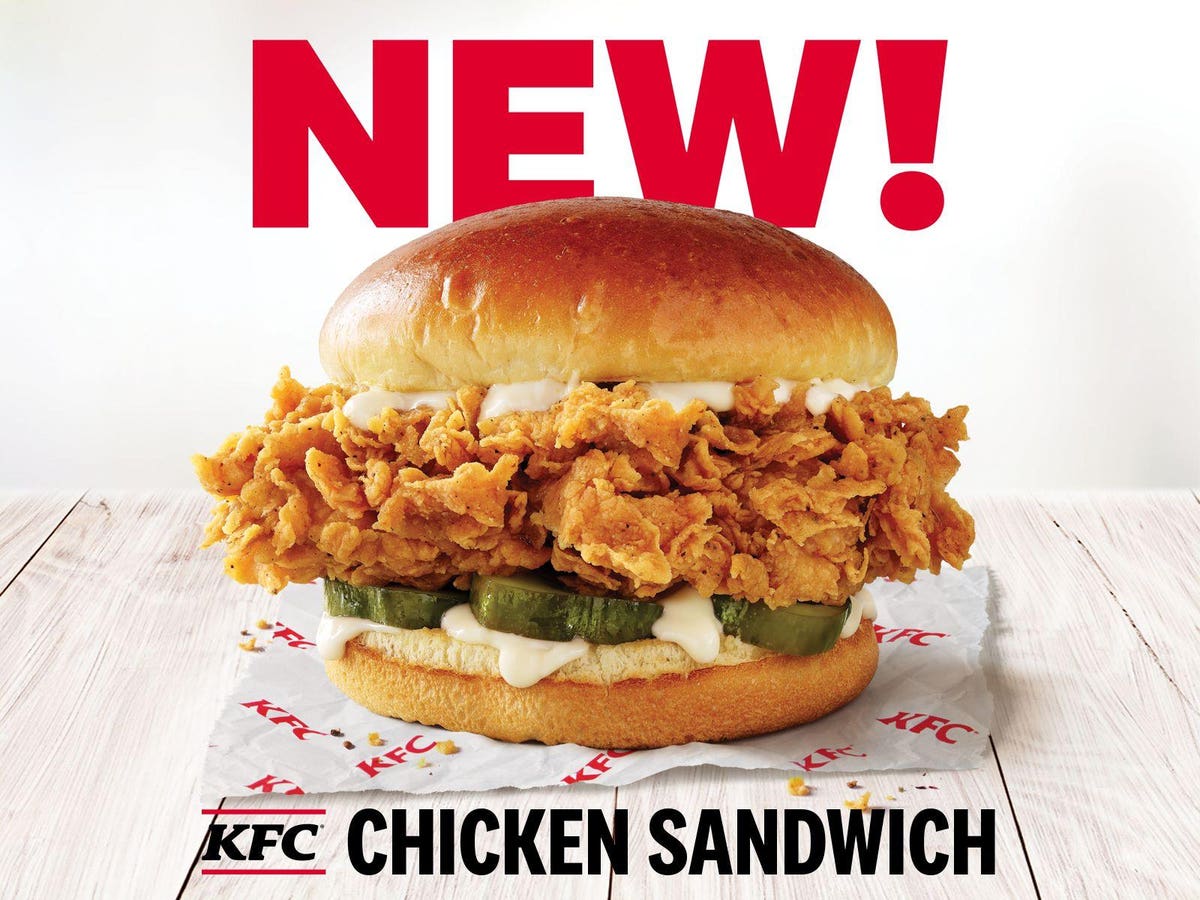 Without question, the biggest story in the fast food space last year was the abrupt success of Popeyes’ chicken sandwich.

That spark was ignited by a single “Y’all good?” tweet at rival Chick-fil-A, which quickly turned into a full-blown wildfire, marking one of the most successful product launches in the history of the restaurant industry. The sandwich generated so much buzz, even McDonald’s
franchisees began demanding a better chicken sandwich to avoid market share loss to both Popeyes and Chick-fil-A.

That may now change, however.

KFC today announced a test of a new, “more premium” chicken sandwich in 15 Orlando area restaurants for a limited time. According to a company press release, the sandwich is an upgrade from its current offering, including a 20% larger Extra Crispy filet, a new buttery brioche bun, three thicker pickles and a choice of either the Colonel’s classic or spicy mayo.

Yes, the company is taking a page from the Popeyes playbook with the three pickles, brioche bun, larger filet and sauce choices. However, there remain plenty of differentiators between the two: Popeyes’ filet is marinated in Louisiana seasonings, while KFC’s filet boasts those signature 11 herbs and spices, for example.

In its press release, CMO Andrea Zahumensky doesn’t sugarcoat why KFC has been absent from the so-called chicken sandwich wars, stating, “let’s face it, ours wasn’t the one to beat … We knew an upgrade was necessary.”

And so, in KFC’s quest to inject itself into that conversation, Zahumensky said the company left no stone unturned: “Our food innovation team set out to create our best chicken sandwich yet … They tested eight variations of thickness and brines before we landed on our pickle. And for our perfect brioche bun, we collaborated with six different bakeries and tested more than 10 formula revisions in order to find the right one to hug the larger-than-ever filet in just the right way.”

On paper, it certainly seems as though KFC has done its homework here. Will it be enough to play catch up? Time will tell.

Meanwhile, there’s no doubt the potential is huge. Consider the past few years in the growing chicken space. According to Restaurant Business, Popeyes generated about $3.2 billion in sales in 2018 and was the 25th largest domestic chain by sales. At the end of 2019–the year of its sandwich launch–Popeyes generated more than $3.8 billion and jumped to No. 19.

Within that same time frame, and despite a sharp uptick in chicken consumption, KFC has remained very consistent on sales, hovering in the mid $4-billion range as the 14th largest U.S. chain. The company gets a solid tailwind from its cadence of innovative launches; however, while products like the Cheetos sandwich or the Chicken and Donut sandwich may create sexy headlines and attract novelty seekers, they may not be generating as much return visits.

What does generate frequency, as demonstrated by Popeyes and Chick-fil-A both, is a simple, premium sandwich that customers crave–a product that can regularly, perhaps habitually, answer that age-old question of “what’s for lunch?”

Think of what such simplicity did for Popeyes. Its sandwich sold out in just two weeks after generating traffic growth of 256% at the chain. Its relaunch in November yielded a 299% increase in foot traffic. In Q1, in the middle of a pandemic that devastated much of the restaurant industry, Popeyes visits jumped by 40%.

Popeyes hasn’t done much else to create these numbers. This is literally all sandwich.

What could that mean for KFC? It’s hard to catch lightning in a bottle twice. But there’s a chance KFC could siphon some of that heavy (and notoriously long-line-inducing) traffic away from Popeyes based on footprint alone. There are nearly twice as many KFCs in the U.S. than Popeyes.

KFC also has another sort of secret weapon to encourage trial. The test sandwich will be offered a la carte for $3.99 or as part of a combo meal with a medium drink and a side for $6.99. That side option includes KFC’s new Secret Recipe Fries. Those fries started showing up in test markets in 2019 and are “dusted” with the brand’s 11 herbs and spices. I had the opportunity to try them last year during a trip to KFC Global Headquarters in Dallas and they would perfectly complement a premium sandwich for lunch on regular occasion.