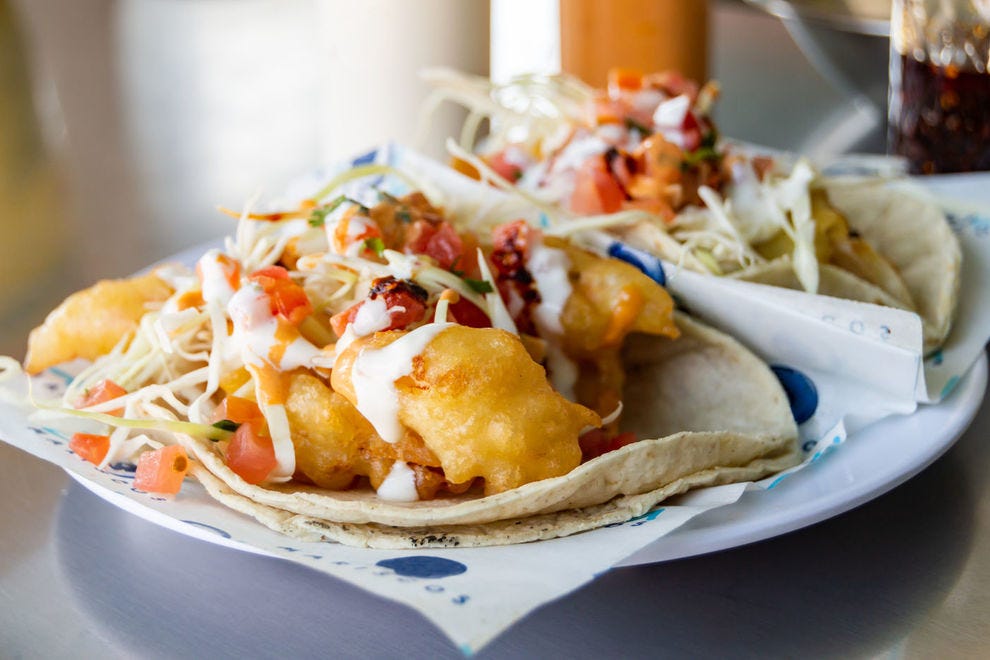 Note from 10Best: Some of the restaurants listed in this piece are not open for business at the time of publication. We’re highlighting them now to provide inspiration for the future, in the hopes that we’ll be able to visit them again someday.

Just two hours south of the border, Ensenada is probably best known for being one of Mexico’s most famous cruise ports. But enthusiastic eaters know it for a far more important reason: It’s the home of the fish taco.

A glut of Japanese fishermen made their way to Ensenada during the 1950s and 60s to take advantage of Baja California’s cold-water currents and exceptional biodiversity. And they brought some of their food traditions with them, which included battering and frying angel shark.

Ensenadenses decided to perfect this snack by making an even crispier fried fish than the original tempura style, and throwing it in a corn tortilla adorned with purple cabbage, salsa bandera, crema, hot sauce and a slice of lime, which is how it’s still enjoyed today.

Angel shark, or angelito, is still what you’ll find at many stands in Ensenada, because its tough meat holds up well during frying and doesn’t break apart or become mushy under the weight of the salsa, crema and lime juice.

But some stands now make tacos with shrimp, cod, yellowtail, haddock, flounder and other white fish. Dogfish and mako shark, which have similar consistencies to angel shark, are often substituted as well.

There are several taco stands that lay claim to the original Baja-style fish taco, but general consensus grants Tacos Fénix the distinction of being the first. The stand sits on the corner of Espinoza and Juarez streets, with the same family still serving the street snack since it opened in 1970.

A simple menu lists the limited options – fish and shrimp tacos – and the fish is fried in a special comal with an oil well, called a disca, that is fit for frying and takes up the majority of the wooden shack’s interior.

There is no seating, and ordering is done from a window overlooking the frying station. The shoulder-to-shoulder crowd here is mixed: gringos right from the cruise ship or bar, fishermen and wealthy businessmen all flock here for a taste of the real deal.

At around $1 each, fish tacos from this stand include all the traditional fixings with a few extra bells and whistles, like a moderately spicy salsa verde, chipotle mayo, cilantro mayo and habanero salsa, where most stands just offer a standard hot red and mild green salsa. It uses dogfish, or cazon, in lieu of the more popular angel shark.

While Tacos Fénix is a must-visit, the best way to eat your way through Ensenada is with a taco crawl – the key is knowing which stands to check out.

Tacos Floresta is maybe the smallest, bare bones operation in town and uses mako shark and a special chipotle mayo.

Tacos Castillo is another local favorite, serving angel shark to a long line of regulars. This stand offers a little more in its variety of salsas, which includes a biting salsa verde and a roasted chile variety.

For awhile, there was a competing narrative about the original fish taco. Ralph Rubio, who founded Rubio’s Coastal Grill in San Diego, used to claim to have invented the fish taco. In recent years, however, he has softened his story to say he was the first in the United States, during the 1980s.

Regardless, their popularity quickly spread across the city, and the fish taco has since transcended San Diego, with gussied up versions served across the United States. You’ll usually find them with cod or haddock, and sometimes with grilled fish of all kinds, including salmon, tuna and striped bass. Other new ingredients include radishes, cilantro lime slaw, beer batter and jalapeño cabbage slaw, to name a few.

But back in Ensenada, they still do things more or less the same way they always have, and the original fish taco, with its crunchy shell, hot salsa, cool crema and tangy slaw is best enjoyed in its home city.

It’s about the overall experience – crossing the congested border, meandering down the Pacific Coast highway and hunting for ramshackle stands housing vats of bubbling lard filled with strips of freshly caught fish.

And there’s just something about eating a taco near the ocean with a crowd of hungry Ensenadenses, and the way every taquero knows how to perfectly fry each strip of fish that can’t be replicated.