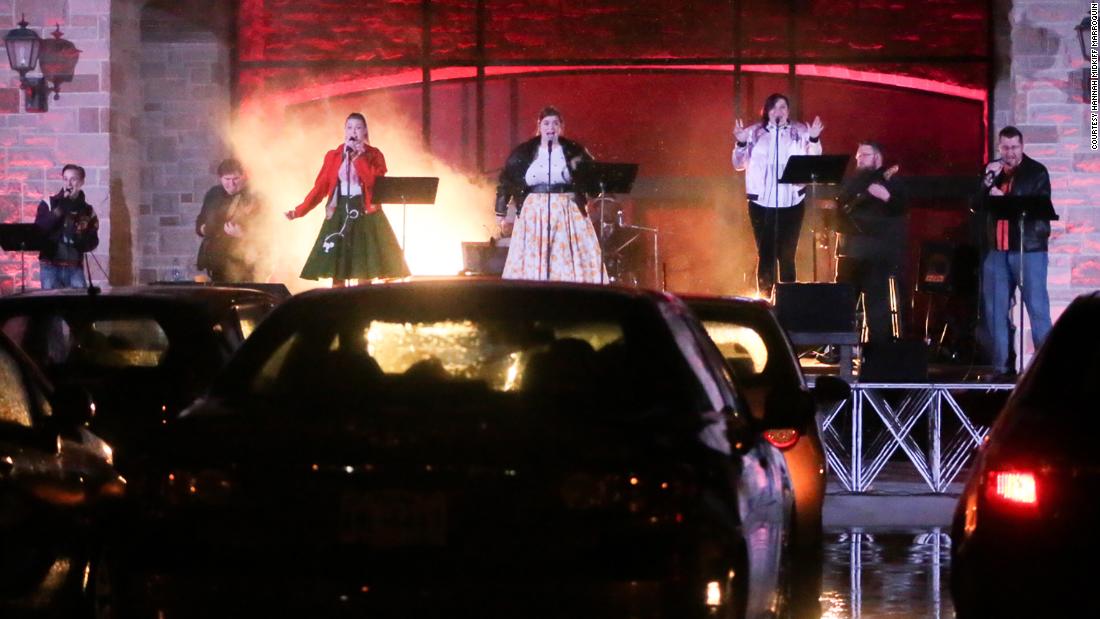 (CNN) — Caitlan Leblo has been singing, dancing and performing on stage since she was 5 years old. Her husband, Josh, has been performing since his senior year of high school. But this week marked a first for them — performing to a parking lot full of cars.

“There was a lot of nerves involved because it was something that we had never really done before, but it was also kind of exhilarating,” said Josh.

As the coronavirus pandemic forces theaters across the country to close their doors and shut down productions, The Plaza Theatre in Cleburne, Texas got creative to make sure that the show could go on. They moved their stage outside and offered drive-in style performances.

“Obviously, it was time for us to try and figure out some alternatives,” said JaceSon Barrus, artistic director of the Plaza Theatre. “We wanted to figure out a way to continue to keep our staff paid and remain viable in the public eye.”

Theater company officials met with local officials to make sure they were in compliance with the local guidelines on public gatherings. And the wheels were set in motion.

Cars in the Plaza Theatre parking lot waiting for the performance.

“We invited people to pull up their cars for free and watch an hour-long performance.”

While the shows were free, donations were accepted, according to Barrus.

The performances were broadcast through the radio. Audience members were not allowed to get out of their cars or even roll down their windows.

“The first night we had a terrible rainstorm. It opened up right as people started parking, but I can think of no other (outside) show where a downpour was actually fine.”

With a scaled back cast of fewer than 10 singers and musicians, the theater puts on themed shows such as a ’50s rock revue and a traditional and gospel hymn showcase.

Caitlan and Josh say even though they perform to people in parked cars, they get the same rush as stepping out on the stage. The new rules about social distancing, however, make it harder to get used to.

“It’s quite interesting, especially when one of the performers is your wife,” Josh Leblo told CNN. “You’re singing a love song together and you’ve got to be six feet apart while your gravitation almost wants you to naturally get closer.”

The scene from the stage as a performer sings to a parking lot of cars.

The shows were a hit. And caused some traffic, about 100 cars came out to each show.

“I was like, ‘are people actually going to want to come to a drive-up theater and sit in their car and listen on the radio?’ And cars were parked down the block almost an hour before showtime just waiting to come in,” said Caitlan Leblo.

The shows were put together with little time for rehearsing and planning, but were performed without a hitch. The only thing that was missing was the applause from the crowd which gave the audience a chance to participate from their cars.

“As people were enjoying the show, they would flash their headlights and honk their car horns. It was pretty cool,” said Barrus.

“It’s kind of startling because honking normally has a negative connotation. So, you’re like, ‘Why are you honking at me?’ And then you’re like, ‘Oh, wait, that’s your only way to respond,” Caitlan Leblo said.

Stay-at-home orders issued Friday halted the drive-in productions for the near future. That means Plaza Theatre will need to adapt again.

But the community of Cleburne, Texas felt grateful for the opportunity to come together while the drive up shows lasted.

“It was absolutely wonderful to be able to get out of the house and feel connected with other people, even if we did have to stay in our cars,” wrote Kristen Worth, a Cleburne resident who attended one of the performances.

For now, the Plaza Theatre plans to stream clips and performances online until the stay-at-home order gets lifted.

Barrus is thankful that the shows were able to shine a spotlight on how people can come together in a time of need.

“We’ve been overwhelmed by the outpouring of support. We’re all heartsick and struggling with the challenges we’re all facing right now and to see people pulling for each other and caring about each other has been has been gratifying.”

Greece to reopen to tourists on June 15
Farmers Can Sign Up For Payments Beginning May 26
I was trapped naked on a German fire escape
Hold onto your boarding pass. How TSA screening procedures are changing because of coronavirus
10 of the most interesting food scenes across the country