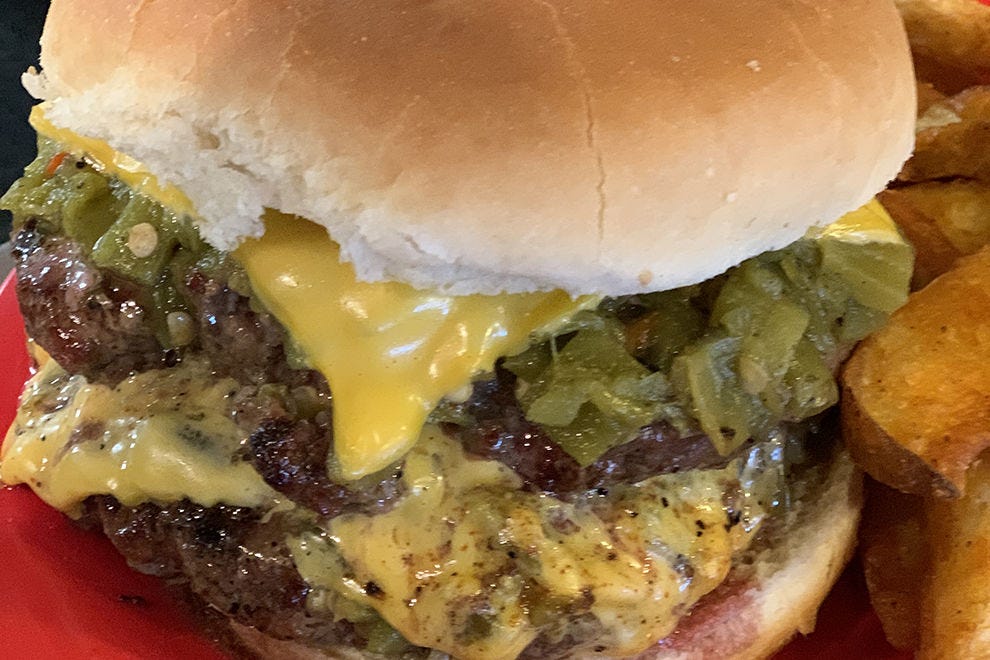 Note from 10Best: Sparky’s is open with a limited menu for carryout at the time of this publication and may also be able to ship directly or via Goldbelly.

Someday, we’ll all be ready to pack our suitcases again and head out on our next adventures. In the meantime, here’s some inspiration for the future.

Hatch, New Mexico is the self-proclaimed “Chile Capital of the World.” This capital city, however, is little more than a three-block byway with some 1,680 residents.

The locally grown chile peppers have earned acclaim far beyond the southwestern New Mexico town, though. And diners are drawn to Sparky’s Burgers, Barbeque & Espresso to taste the celebrated chile at the source. At Sparky’s, the signature green chile cheeseburger comes with a side of Americana.

Husband and wife duo Teako and Josie Nunn, and their daughter Michelle Archer, opened the roadside spot a dozen years ago. Teako had been sketching dreams for the burger joint on napkins for years, and his wife and daughter encouraged him to finally make all those sketches reality.

After growing up eating in legendary – at least in New Mexico – green chile cheeseburger joints like the Owl Cafe and Buckhorn Tavern, Teako wanted that dish to star on his restaurant’s menu. The cheeseburger with a piquant topping has a near cult following in the Land of Enchantment. “They’re addictive,” Nunn says.

Nunn keeps the burger recipe simple, allowing the ingredients to shine. It starts with ground Black Angus chuck. The staff makes the patties fresh each morning and sizzles them on a 700-degree grill until the patties char. Nunn says the cooking method seals in the family’s signature seasoning, which several generations of the Nunn family have been using in their restaurants since the 1970s.

“We don’t cloud the burger with mushrooms or Swiss cheese or fancy add-ons,” Nunn says. They serve the patty on a low-profile, squishy bun with American cheese and green chile; it doesn’t have traditional burger toppings such as lettuce, tomato and condiments.

“It’s direct and uncomplicated, so all the ingredients speak out,” Nunn says. The dish has a farm-to-plate twist since the chile is grown within a few miles of Sparky’s. There’s also a vegetarian version using a black-bean patty and similarly simple toppings.

Green chile mixes in and tops most of Sparky’s menu items, including green chile lemonade and a green chile chocolate shake that rocker Ozzy Osbourne famously drank on his TV show “Ozzy and Jack’s World Detour.” The restaurant also serves barbecue, and even that sauce features chile grown within six miles of the restaurant.

“Green chile comes automatic on everything unless people ask for it without,” Nunn says. 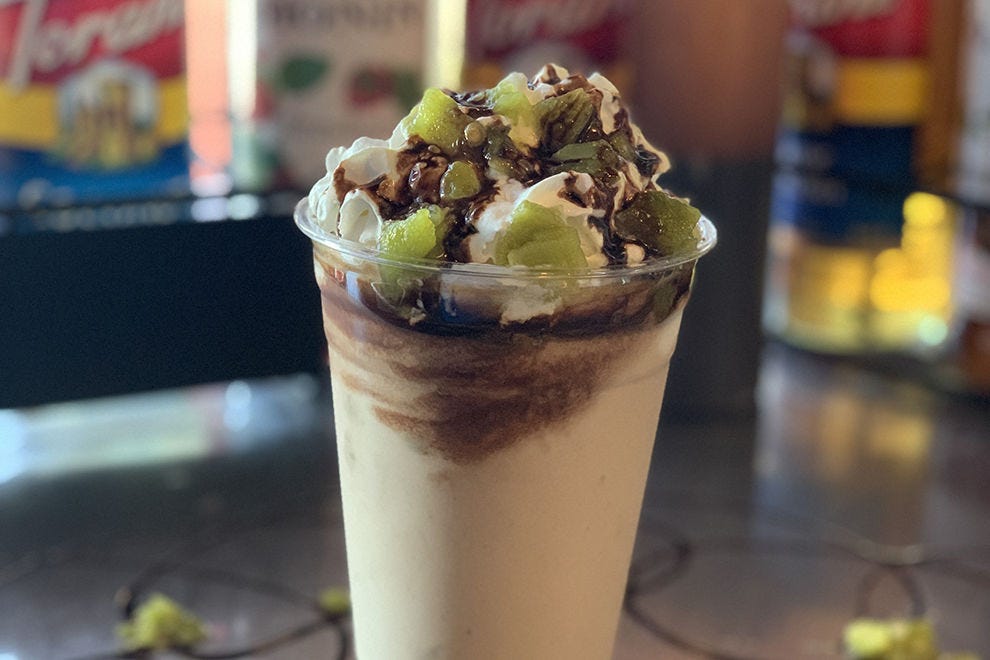 As many as 600 diners per day will stop in Sparky’s, but they don’t just line up for green-chile laden meals. They’re also drawn there for the vintage collectibles bedecking the 175-seat burger joint inside and out. As they wait in line (usually it’s out the building), people snap photos with the stable of giant statuettes.

A long-time antiques collector, Nunn has appeared twice on cable TV hit “American Pickers.” He’s grown his collection of Muffler Men and other roadside giants since he first discovered he could purchase them on eBay. Now the twenty-strong gaggle includes a full family of A&W Restaurant figures, a giant hot dog, a Yogi Bear, a green alien, a 30-foot-tall Uncle Sam, and Sparky, the restaurant’s namesake robot, to name a few. 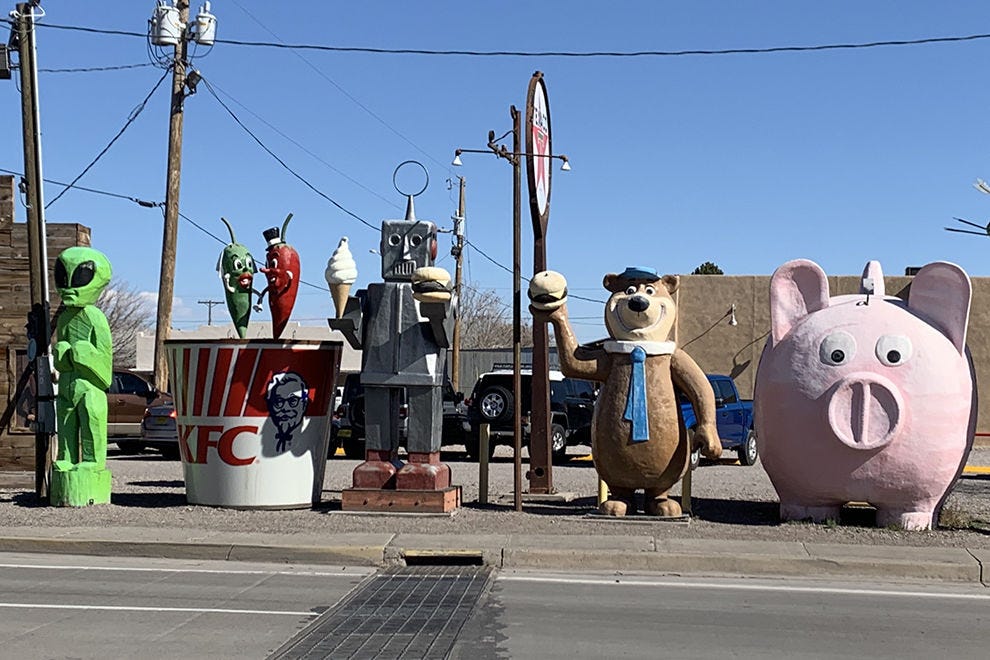 Inside, the restaurant’s wall-to-wall decorations capture the heyday of American roadside culture with gas station signs, grills from classic cars and Coca-Cola bottle dispensers. The most recent addition is a sign from the Cozy Motel, in Springer, New Mexico, which is newly glowing neon after Nunn refurbished it. A taxidermy moose head wearing a Stetson presides over the collection.

“I love places that have comfort food and have memorabilia,” Nunn says. “We just took it to the next level. I love to see people enjoy it. They walk through with their phones taking pictures with their mouths open.”

The collection – and the promise of selfies – draws people off the road, just as it did when these commercial antiques were newly minted. “The only reason Hatch exists is because it’s a bypass. People cut the corner between Tucson and Albuquerque. Our giants get tourists to slow down just like they did the 20s, 30s, and 40s. They stop, and get a cup of coffee and a shake,” Nunn says.

These days at Sparky’s, however, it’s a green chile shake.

Former Continental CEO on what comes next for airlines amid coronavirus crisis
What will travel look like after coronavirus?
Coronavirus impact: Satellite images show world cities before and after outbreak
People in the West are ignoring advice to stay home. That’s because it’s too confusing, one expert says
Is this the world’s best Indian restaurant?