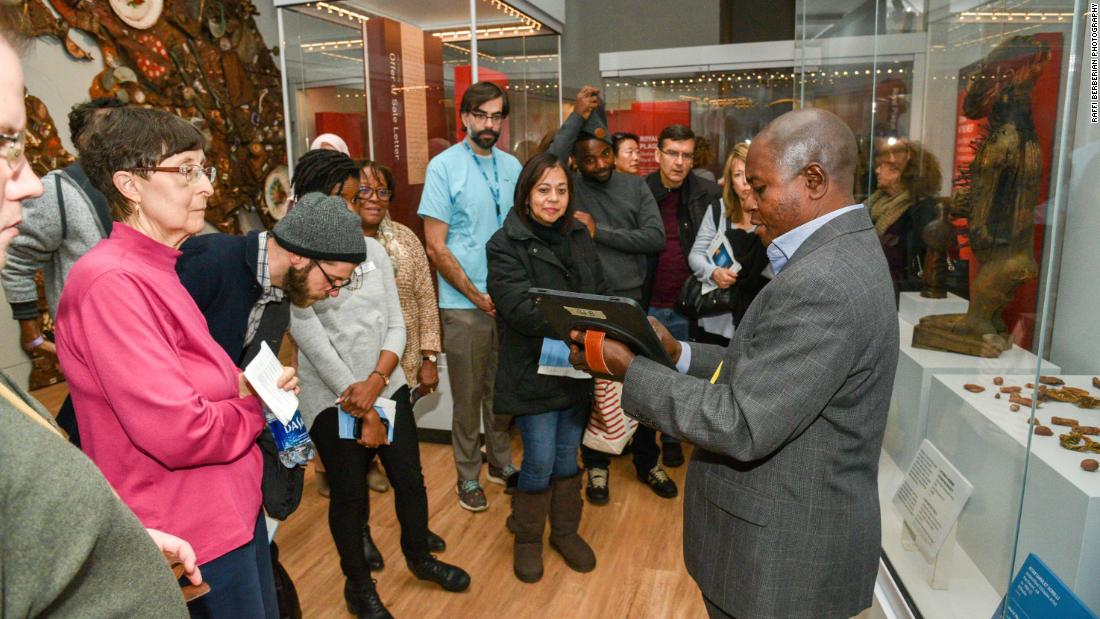 (CNN) — Docents at the Penn Museum in Philadelphia have not always reflected its diverse, vibrant collection.

The museum’s Ellen Owens and Kevin Schott found a way to change that. “Both of us had been thinking about how we can diversify our guide pool,” Owens told CNN. They used a grant to create a new program at the University of Pennsylvania-affiliated museum, called Global Guides.

The Global Guides work part-time for the museum for scheduled tours on Fridays, Saturdays and Sundays. They tell visitors about artifacts from their own part of the world — and put them in cultural context from personal experience.

What Schott believes sets this experience apart from that of other museums is that the Global Guides can relate artifacts dating back thousands of years to their first-hand experiences and upbringings.

“The artifacts look so alien,” Schott said. “The past looks so foreign to us. You need a guide to say they aren’t so different from us.”

Staying true to a personal past

Yaroub Al-Obaidi left Iraq as a refugee in 2007. Formerly a college lecturer at the College of Fine Arts University of Baghdad, he ended up in Syria with his four brothers and parents until the Syrian civil war began. He then moved to Malaysia — where his parents remain. He came to the United States in 2016.

He said an exhibit showing the jewelry buried with the Sumerian Queen Puabi from Ur always inspires when he gets to talk about it with his tour groups. According to Al-Obaidi and Schott, the jewelry weighed five pounds and the queen is believed to have worn it at her wedding. The gold jewelry is beautiful on its own, but it creates a connection that still exists in Iraqi marriage culture today, said Al-Obaidi.

Yaroub Al-Obaidi, an Iraqi refugee and one of the Penn Museum’s Global Guides.

“In Iraq, people want to buy more gold for the bride,” Al-Obaidi explained. “Some command the husband to buy more gold to make the bride look more shiny. I found a connection with gold, from 4,000, 5,000 years old and nowadays. I started to share with the audience and visitors how the bride looks, as Americans have the traditional wedding.”

The jewelry is just one example of what Al-Obaidi believes is the most rewarding part of his job: connecting with visitors.

“This is one of our goals and this program is to create the connection to build the bridge between us, me as the guide, from Iraq originally, where the artifact came from, and now I am here in the USA and living in Philadelphia giving this tour,” he said.

Bringing diasporas and disparate people together

Clay Katongo lived in the Democratic Republic of Congo and Angola but moved to the United States in 2003 after+ war and unrest broke out in the region. He studied at a seminary in Nyack, New York, to become a pastor and eventually made his way to Philadelphia, where he joined the Penn Museum last year.

When he learned about the job, Katongo said he welcomed the chance to share his stories with other people willing to listen.

Part of the African Section at the Penn Museum in Philadelphia.

Katongo believes each object embodies a spirituality of sorts and helps tell stories often lost to the ages, as most prehistoric Africans only shared their histories by word of mouth.

“There is a saying, when African ancestors die, there is an entire library that is burned,” he said.

“It’s burning with all the knowledge. Just by seeing the object, it connects the present to the past. It could bring to life what our ancestors had believed when they lived.”

Bridging the past to the present

It’s not just the objects that paint a picture of people’s commonalities, according to Schott. In his mind, the experiences of a refugee could happen to anyone.

“You can pile up facts on either side and just fight, but you can’t take away personal experience,” he said.

“All you can say is, ‘I’m sorry that happened to you.’ You can’t counter the story of a Global Guide.

“There have been a few people that have asked personal questions but the nature of the tour being personal recollections, there’s not really anything to fight about.”