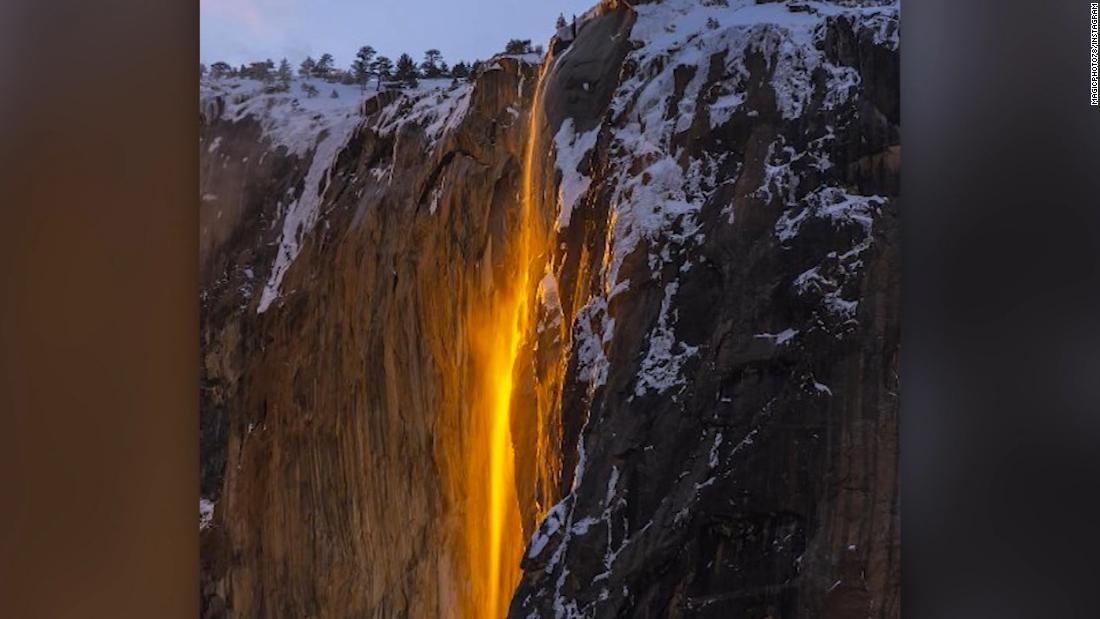 You can see “Firefall” for only a short time in February, and it draws hundreds of visitors each night. This year, that’s between February 13 and 27.

How it looks varies from year to year and even day to day. It all relies on the weather and how much water is flowing in Horsetail Fall.
“This year, there is little to no water in Horsetail Fall, with no precipitation in the forecast over the next two weeks,” Yosemite National Park said in a statement Wednesday.

That may leave watchers disappointed, as weather and conditions need to align just right to achieve the magic of “Firefall.”

If you are planning to check out this yearly spectacle, the National Park Service encourages visitors to be prepared for cool weather and bring along a flashlight. If you want that Instagram-worthy image, you might want to visit the park early to claim your spot before the crowds arrive.

A crowd gathers at Yosemite National Park ahead of sunset to capture the “Firefall.”

The park has put restrictions on where people can park their cars and where they can see the spectacle for the 2020 Firefall season.

This is why: More than 2,000 visitors huddled on riverbanks to catch a glimpse of the falls on February 22, 2019, the park service said. The overcrowding caused erosion and left plants trampled.

“That didn’t last long as the entire area filled with hundreds of people looking to witness/photograph the ‘Firefall,'” said Geyoghlian.

But he added that it is all worth the wait.

“My reaction was complete amazement. I was overwhelmed with excitement to finally get to see it in person AND get some good shots of it too.”

A YouTuber’s fancy Bali vacation sure looked nice. Nope, the photos were taken in an Ikea
How to see the northern lights (and other inspiring sights) in the mighty Yukon
A snowy hot springs where clothing is optional after dark
Coronavirus cruise ship to undergo major cleaning before April sail
Saudi Arabia temporarily bars entry for pilgrims as coronavirus fears escalate