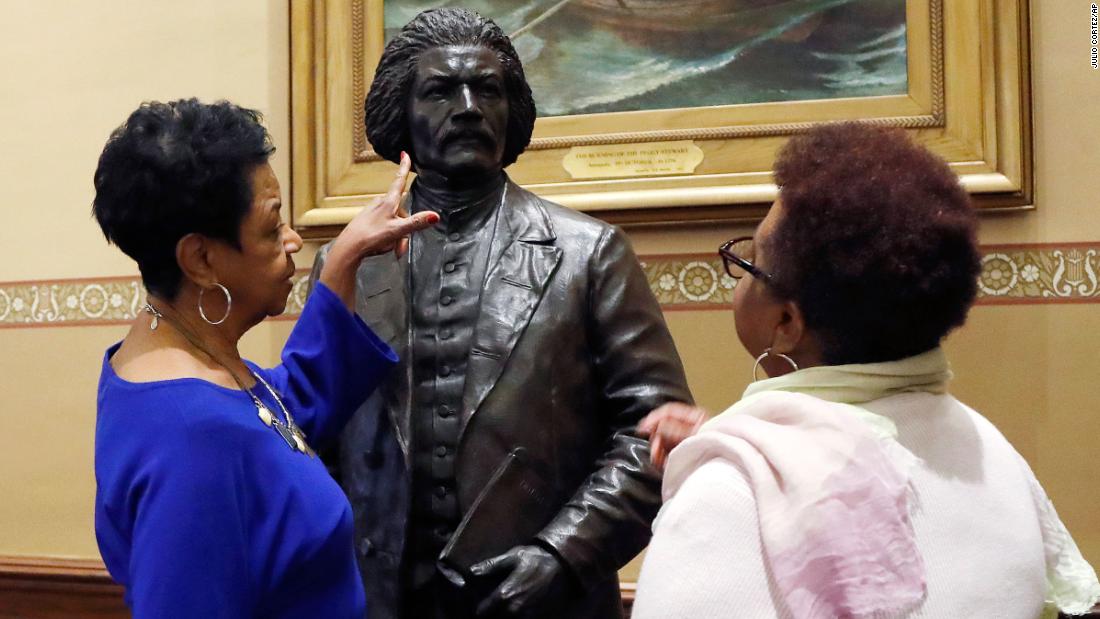 (CNN) — They fought to end slavery more than 150 years ago. Now, statues of Harriet Tubman and Frederick Douglass are standing in the room where it was abolished in Maryland.

The two life-size bronze statues of the American-American abolitionists were unveiled in the Maryland State House during a Monday night ceremony. They stand in the Old House Chambers, the very room where Maryland adopted a new constitution banning slavery in November 1864.

Both Tubman and Douglass were born in Maryland in the 1800s and both made strides and became leaders within the abolitionist movement. Tubman, after escaping slavery herself, became known as “the Moses of her people” after helping other slaves run away to freedom. Douglass, who also escaped slavery wrote and published books about his life, founded a newspaper and continued to write and give speeches about his experience.

“For a time, neither could legally return to the state of Maryland after their escape,” Maryland lawmaker Jheanelle Wilkins, who attended the unveiling, wrote on Twitter. “But tonight we return them to their rightful place in (Maryland) history.”

According to a news release from the governor’s office, descendants of both Tubman and Douglass attended the unveiling.

“It is my hope that when we view these wonderful statues of these incredible heroes and reflect on the countless contributions of these remarkable leaders, it will remind each of us to always stand on the side of goodness and love, and on the side of unity and justice,” Gov. Larry Hogan said in a statement.

Each of the statues weighs about 400 to 500 pounds, the news release said. The project began a little more than a year ago, when the state’s Board of Public Works voted for a contract to design and install the two figures, the release said.

“All Marylanders and visitors to the State House will have the opportunity to admire these national heroes for generations to come,” said Ellington E. Churchill, Jr., the Maryland Department of General Services secretary.

Why Japanese baseball fans are as riveting as the game itself
Learn how to make pasta on a gorgeous rooftop in Rome
Are fat fliers being discriminated against by airlines?
A YouTuber’s fancy Bali vacation sure looked nice. Nope, the photos were taken in an Ikea
10 Tokyo street foods that you need to eat