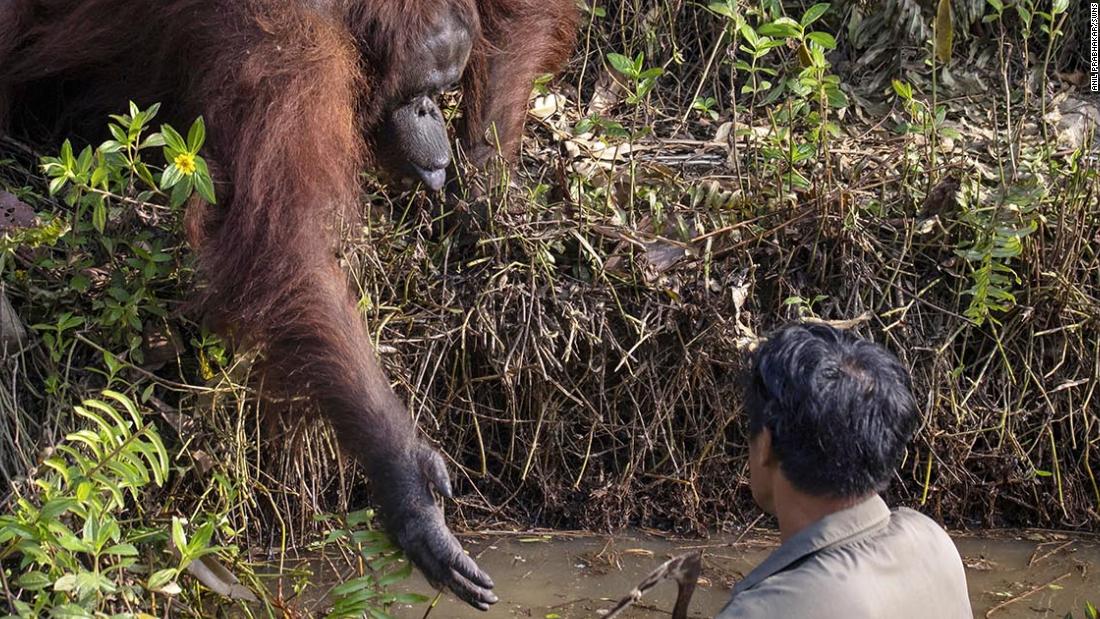 Travel
Share on Facebook
Share on Twitter
Share on Pinterest
Share on LinkedIn
Share on Facebook
Share on Twitter
Share on Pinterest
Share on LinkedIn
Amateur photographer Anil Prabhakar captured the fleeting moment, in which one of the Indonesian island’s critically endangered apes stretched out its hand to help a man out of snake-infested water.
Prabhakar was on a safari with friends at a conservation forest run by the Borneo Orangutan Survival Foundation (BOS) when he witnessed the scene.
He told CNN: “There was a report of snakes in that area so the warden came over and he’s clearing snakes.
“I saw an orangutan come very close to him and just offer him his hand.”
Prabhakar said it was difficult for the guard to move in the muddy, flowing water. It seemed as if the orangutan was saying “May I help you”? to the man, he said.
“I really wasn’t able to click,” he said. “I never expected something like that.
“I just grabbed that moment. It was really emotional.”
Venomous snakes are predators of Borneo’s orangutans, which are under threat from forest fires, habitat loss and hunting.
“You could say snakes are their biggest enemy,” said Prabhakar, a geologist from Kerala in India.
The guard then moved away from the ape and climbed out of the water. When Prabhakar asked why he moved away, “He said, ‘they’re completely wild, we don’t know how they’ll react.'”
Prabhakar said the entire encounter lasted just three or four minutes. “I’m so happy that moment happened to me,” he said.
His photo of the moment has been liked 15,000 times on Instagram.
The orangutan is Asia’s only great ape and is found mostly in Borneo and Sumatra in Indonesia, with the remaining 10% found in Sabah and Sarawak in Malaysia, according to the BOS foundation. It is estimated that the Bornean orangutan population has decreased by more than 80% within the past three generations.
The apes are brought to the conservation forest if they are injured, at risk from hunters or facing destruction of their habitats. Once they are healthy, they are returned to the wild.
They also reproduce very slowly, according to BOS. A female will only give birth every six to eight years in the wild.
This article was originally published by Cnn.com. Read the original article here.
Share on Facebook
Share on Twitter
Share on Pinterest
Share on LinkedIn