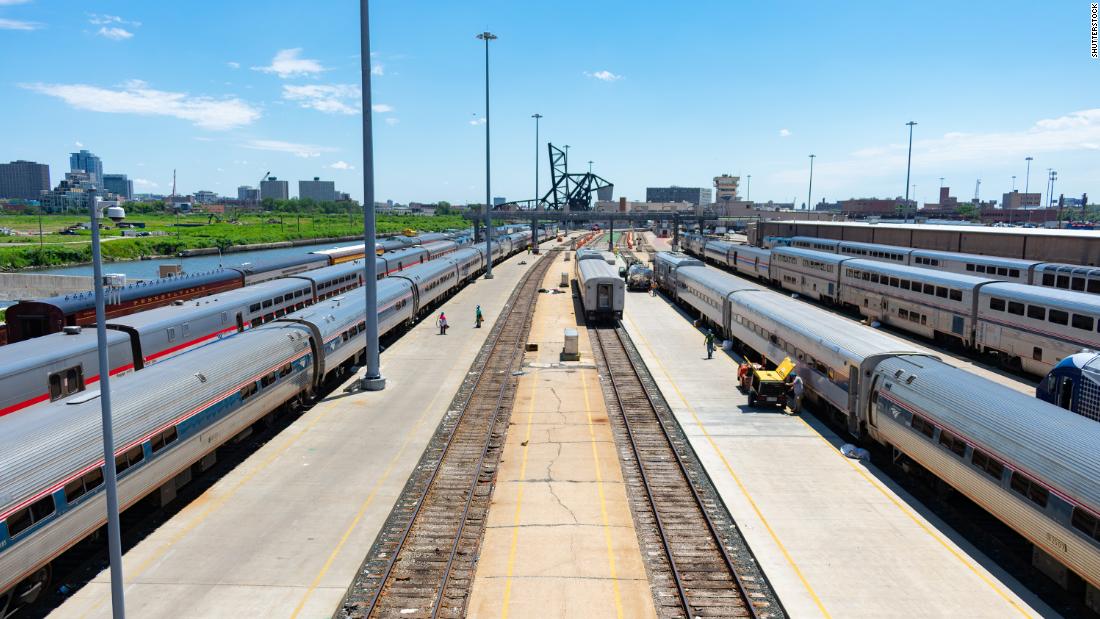 Travel
Share on Facebook
Share on Twitter
Share on Pinterest
Share on LinkedIn
Share on Facebook
Share on Twitter
Share on Pinterest
Share on LinkedIn
Access Living said it got the $25,000 round-trip quote last month, after it told an Amtrak agent that five of the 10 people making the trip are in wheelchairs.
“We were shocked, we thought there was a mistake in the email they sent us,” Bridget Hayman with Access Living told CNN.
In an email exchange obtained by CNN, an Amtrak agent explained that the train only had three spaces for wheelchairs, so it would have to take a car out of service and remove some seats to accommodate the group. Amtrak can’t sell seats in the car until it’s returned to its regular configuration, so that contributed to the cost, according to the email.
The agent told the group that Amtrak had absorbed the cost of reconfiguring the cars in the past but said that policy had changed last year.
“We couldn’t find the policy they were citing. If this is a policy, this is a problem for a lot of people,” Hayman, who uses a wheelchair herself, told CNN.
Hayman said the group had tried to resolve the issue and even reached out to the Amtrak executive in charge of the rail service’s stations.
The story drew national attention, and the group heard from the railroad service on Monday.
“Amtrak officials have contacted Access Living and we apologize for their inconvenience as we have been working through how to serve their travel needs,” Amtrak said in a statement provided to CNN. “We assured them that as valued customers we will accommodate all passengers who use wheelchairs aboard the same Amtrak trains they originally requested between Chicago and Bloomington-Normal, Illinois.”
Hayman told CNN that Amtrak told the Access Living that they would accommodate the group and only charge the regular fare.
“We’re pleased that Amtrak now says it can accommodate all of our wheelchair riders tomorrow for no additional fee, but we remain deeply concerned about its new policy charging disabled customers huge fees to remove seats to accommodate wheelchairs,” she said. “The policy must change. We’re worried about future trips.”
Sen. Tammy Duckworth (D-Illinois) tweeted on Sunday that the $25,000 fee was “outrageous.”
“The Americans with Disabilities Act has been the law of the land for 30 years. Yet in 2020, @Amtrak believes it would be an unreasonable burden to remove architectural barriers that would enable a group with five wheelchair users to travel together,” she wrote.
Duckworth is the ranking Democrat on the Senate Commerce Committee’s Subcommittee on Transportation and Safety, which focuses on safety and infrastructure development related to both freight and passenger rail, including Amtrak.
The senator lost both of her legs and partial use of her right arm in 2004, when a rocket-propelled grenade hit the Black Hawk helicopter she was flying in Iraq. She sometimes uses a wheelchair.
An Amtrak spokesman said that it is scheduling a meeting with Duckworth’s office to review and discuss Amtrak policies for future instances where rail cars need special reconfiguration and modification to accommodate passengers with disabilities.
This article was originally published by Cnn.com. Read the original article here.
Share on Facebook
Share on Twitter
Share on Pinterest
Share on LinkedIn

First Look: Frozen’s Arendelle is coming to Disneyland Paris
On the trail of African American writers and artists in Paris
A YouTuber’s fancy Bali vacation sure looked nice. Nope, the photos were taken in an Ikea
10 reasons why you need to visit San Francisco’s Presidio
Learn how to make pasta on a gorgeous rooftop in Rome