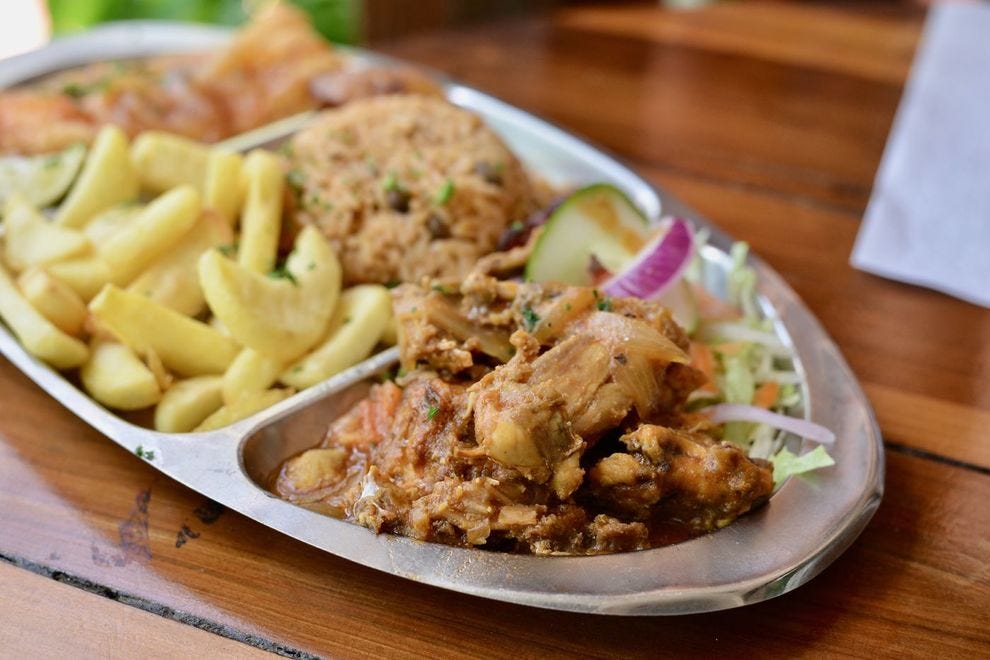 Daydreams of island vacations usually include sunny visions of pina coladas and freshly caught seafood enjoyed beachside. While Curacao has plenty of both, the country’s blend of influences – African, Dutch, Spanish, Portuguese, Jewish and more – creates an eclectic cuisine you might not expect to find on an island in the Caribbean.

So go ahead and order that fruity frozen cocktail, but make sure to sample some of these 10 dishes and drinks, too. 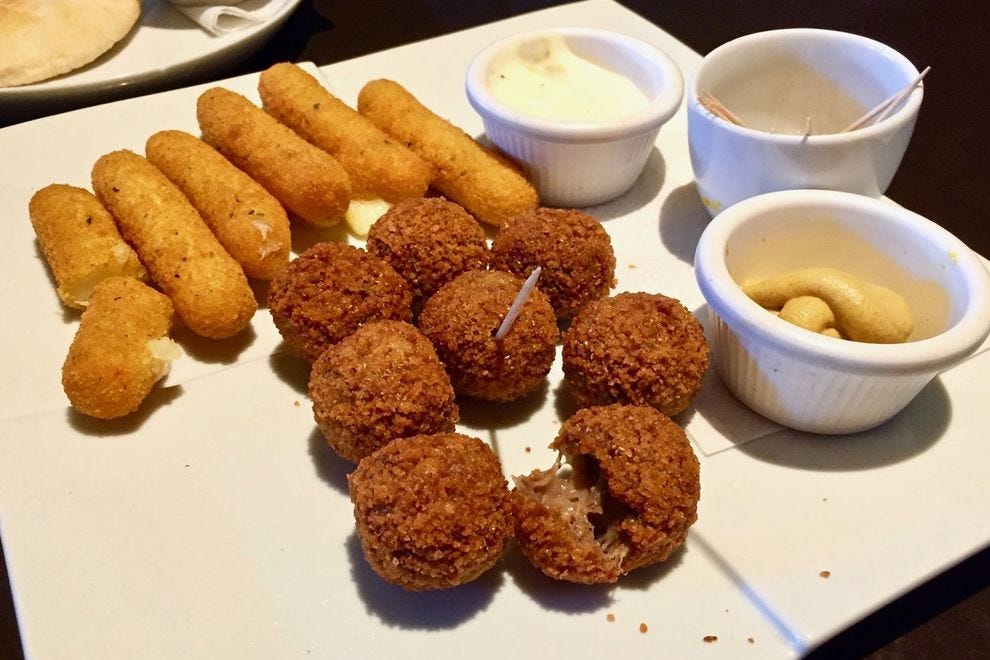 This quintessential Dutch snack is as common on Curacao as blue skies and beach chairs. The Netherlands colonized Curacao in the 1600s and it remained under Dutch rule until 2010. Today it’s still part of the Kingdom of the Netherlands, but as an autonomous country.

Four-hundred-plus years of Dutch in Curacao means that Dutch fried favorites, especially bitterballen, are easy to find at any bar or sidewalk cafe.

The beer-friendly bite-sized snack is a breaded, deep-fried ball of gooey beef and gravy and it’s typically served with mustard for dipping. Take a mid-afternoon break for a cold Polar pilsner and a plate of bitterballen – or frikandel (deep-fried sausage) – at Cafe Old Dutch, a laid-back European-styled pub with sports memorabilia on the walls in Willemstad, Curacao’s capital. 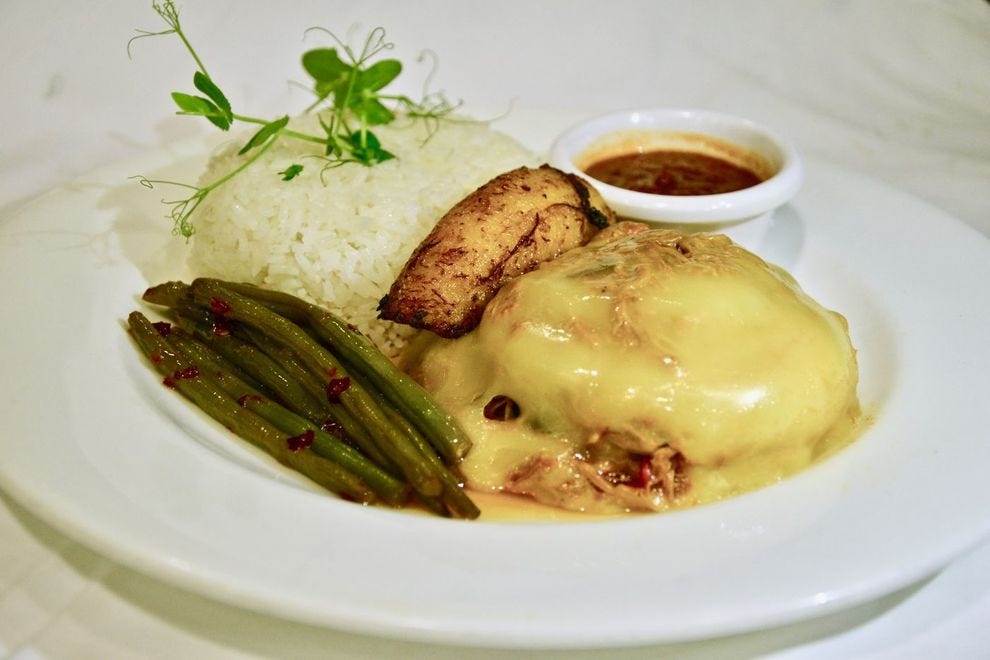 Curacao’s tangled history includes its role as a center of the transatlantic slave trade. The country’s unofficial national dish is based around Dutch cheeses, but it likely has origins among enslaved Africans. They would turn leftover Edam or Gouda rinds into a meal by stuffing them with spiced chicken, and odds and ends like raisins, then bake the whole thing until the flavors fused.

“You can make it different ways, but the best-known way is with chicken and vegetables. They used to wrap it all in a banana leaf and put it in the oven,” says Adrian Lake, chef at the upscale Pen restaurant at Willemstad’s Avila Beach Hotel, the longest-running hotel on the island. 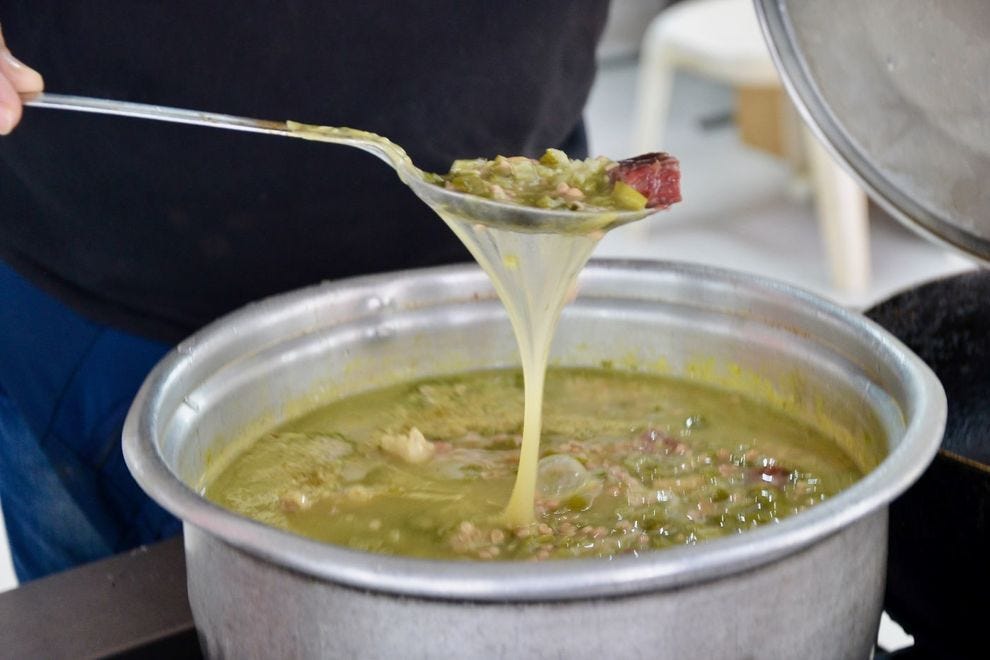 When asked about local foods, chef Lake brings up another African-Caribbean dish, giambo. He stops slightly short of recommending it, since the most accurate way to describe the stew, heavy with okra, is “slimy,” but admits it definitely belongs on Curacao’s list of must-try meals.

The green stew is a mix of okra, fish, salted meat (beef or goat) and basil. Dip a spoon in, pull it up, and you’ll see a trail of okra slime – it’s a love it or hate it texture. Ask for a sample at Plasa Bieu (also called Marshe Bieu) in Willemstad. The busy cafeteria features a row of vendors selling local foods.

Plasa Bieu is a good spot to try another ubiquitous dish, karni stoba. The beef stew – also made with kabritu (goat) – is a hearty dish of cubed, marinated meat simmered with different combinations of onions, garlic, cumin, curry, nutmeg, bell peppers and tomatoes.

You’ll find it everywhere, from the casual cafeteria to the elegant Restaurant & Café Gouverneur de Rouville, set in a historic mansion overlooking the St. Anna Bay and the colorful row of Dutch colonial buildings that line the water. 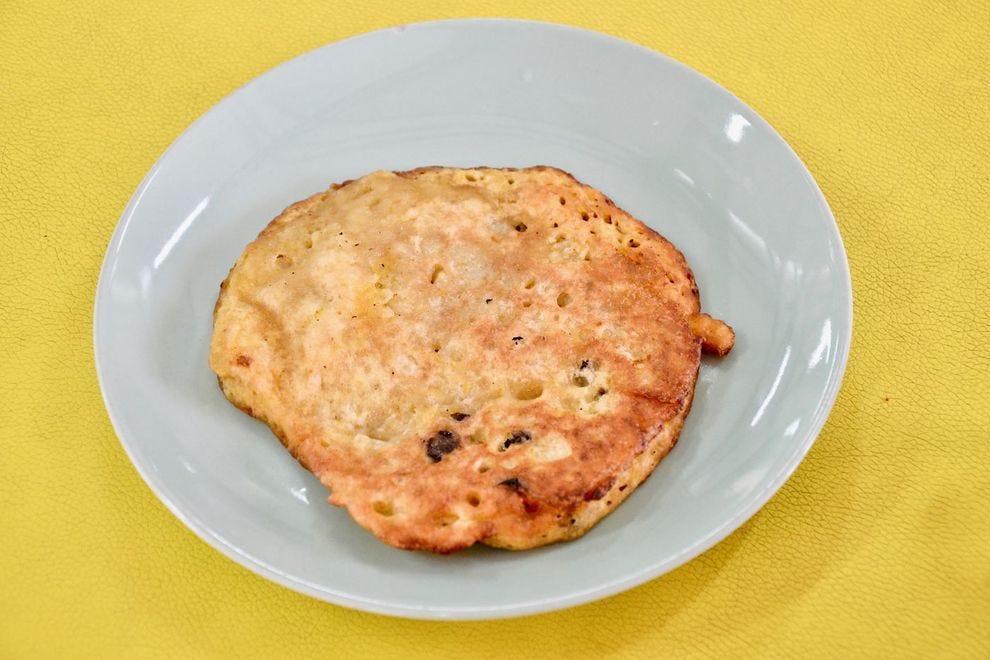 Morning is one option for when to eat these sweet, fluffy-yet-dense pumpkin pancakes. But they also work as a cinnamon-sugary side dish with a plate of savory stoba or on their own as a filling snack. 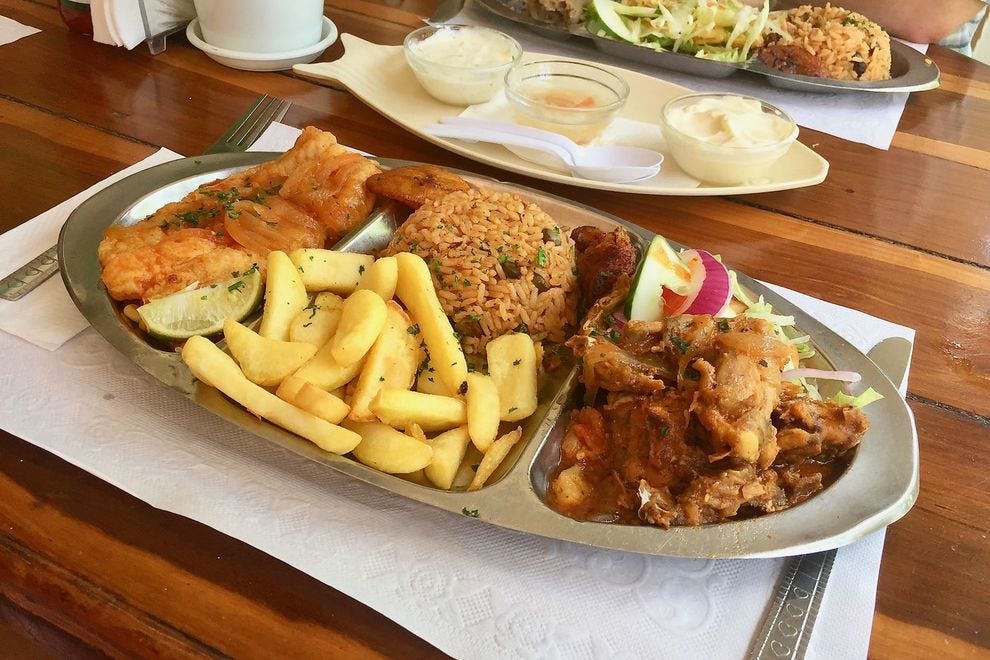 You may not want to eat an iguana after spotting the regal lizards roaming around beaches and between tables at outdoor cafes in the more rugged western part of the island. But if you’ve got a hankering, iguana on a plate isn’t hard to find.

The go-to spot is Jaanchie’s in Westpunt, an area that’s much less developed than Willemstad to the east. Owner Jan “Jaanchi” Cristiaan stops by every table to talk through food options. If you haven’t had iguana before, he’ll encourage you to order a smaller portion along with something else, like a grouper fillet.

It’s not a bad idea, considering the work that goes into eating iguana. It tastes like chicken (of course) but it’s filled with small bones. (On the other hand, as local lore has it, iguana is an aphrodisiac.)

Ask for a table by the big open windows so you can watch black and lemon-yellow birds frenetically amass on the hanging bowls Cristiaan fills with sugar.

Located less than 40 miles off the coast of Venezuela, Curacao counts South American cooking among its culinary influences. When you stop at a batidos truck for a mango or soursop shake (skip the milk and sugar for a bright burst of natural sweetness), check out the rest of the menu; chances are good you’ll see a few types of pastechi listed.

The savory, crescent-shaped, fried or baked pastry is similar to an empanada, though the dough is usually lighter. Common fillings for this handheld breakfast or snack include Gouda cheese or ground meat. 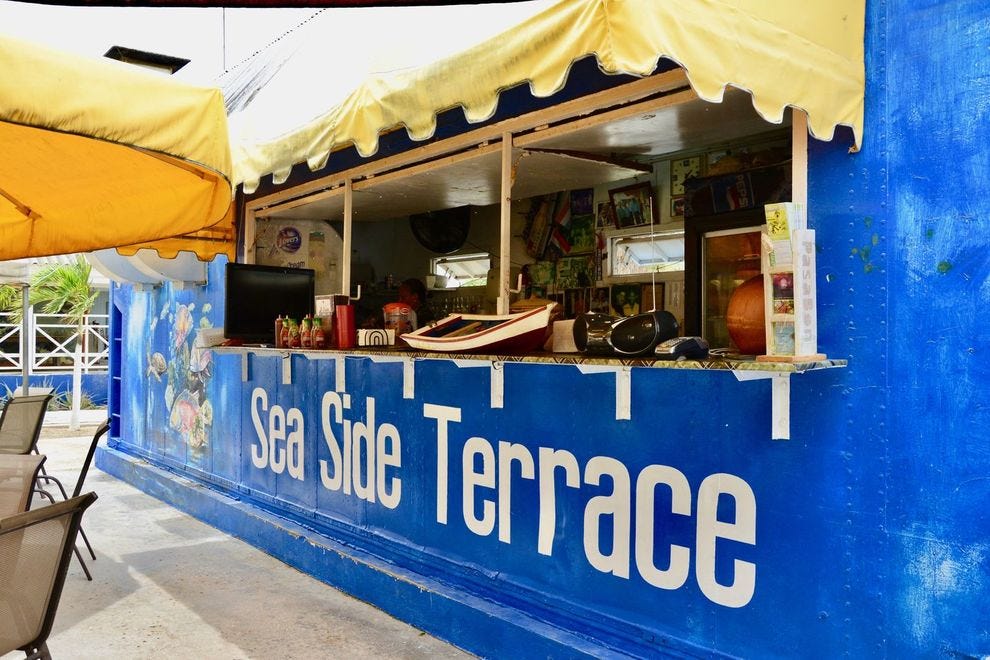 Sea Side Terrace in Curacao — Photo courtesy of Justin Blasi

Seafood on an island is a no-brainer, whether it’s conch with garlic and butter or fried red snapper. But how about fish of the venomous variety? At Sea Side Terrace in Willemstad, Heinrich “Enchi” Ensermo has been feeding locals and tourists at palm tree–shaded tables just steps from the beach for 25 years.

His mostly seafood menu often includes lionfish, the striped fish known for its long, venomous spines and its status as an unwelcome invasive species in the Caribbean, as well as other parts of the Atlantic. Getting them out of the water is a good thing – and when you remove their sharp spines, they’re good to eat.

Dig into the white, buttery meat with a sprinkle of fiery pika sauce and sides of funchi (polenta) or fries drizzled with mayo and ketchup. 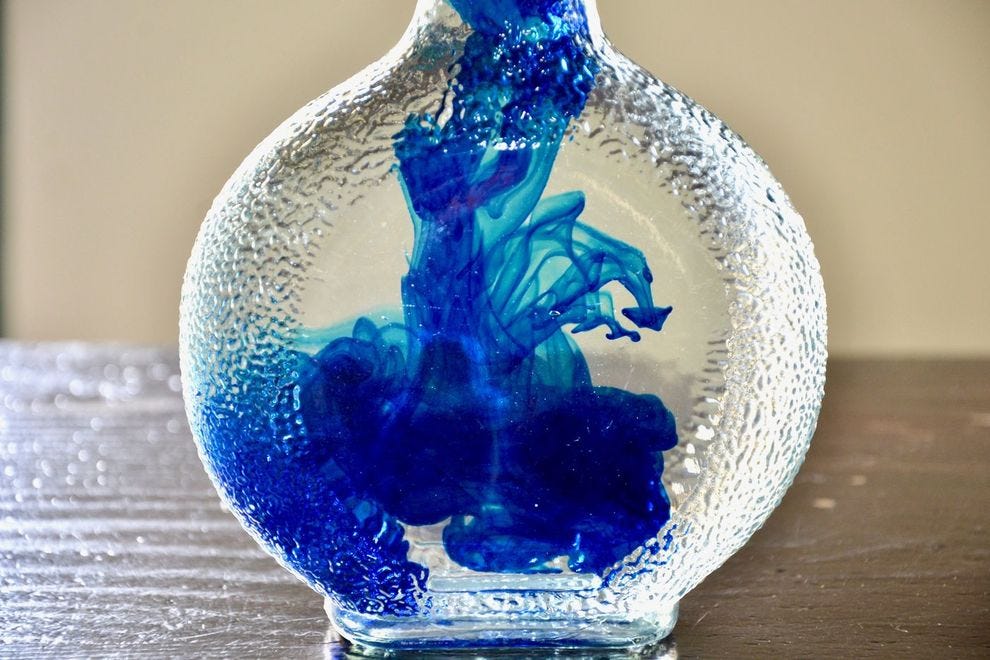 It’s no surprise that in a country named Curacao, you’ll find an original distillery that makes authentic curacao liqueur. But here’s something you might not have expected: Senior & Co. makes red, orange, green, clear and the best-known blue curacao – and they all taste exactly the same. The only difference is the color.

Spanish conquerors brought Valencia orange trees to the island in the 1500s but the hot, arid climate turned the fruit bitter and eventually created laraha trees, a descendant of Valencia with highly unpleasant oranges. In the late 1800s, business partners Haim Mendes Chumaceiro and Edgar Senior starting using the dried peels of the laraha fruit to make liqueur and bottling it for sale.

The distillery that came out of their collaboration is still in operation today, with the original copper kettle imported from Philadelphia, and open for tours and tastings. Make sure to try the tamarind, rum raisin, coffee and chocolate varieties of curacao too. 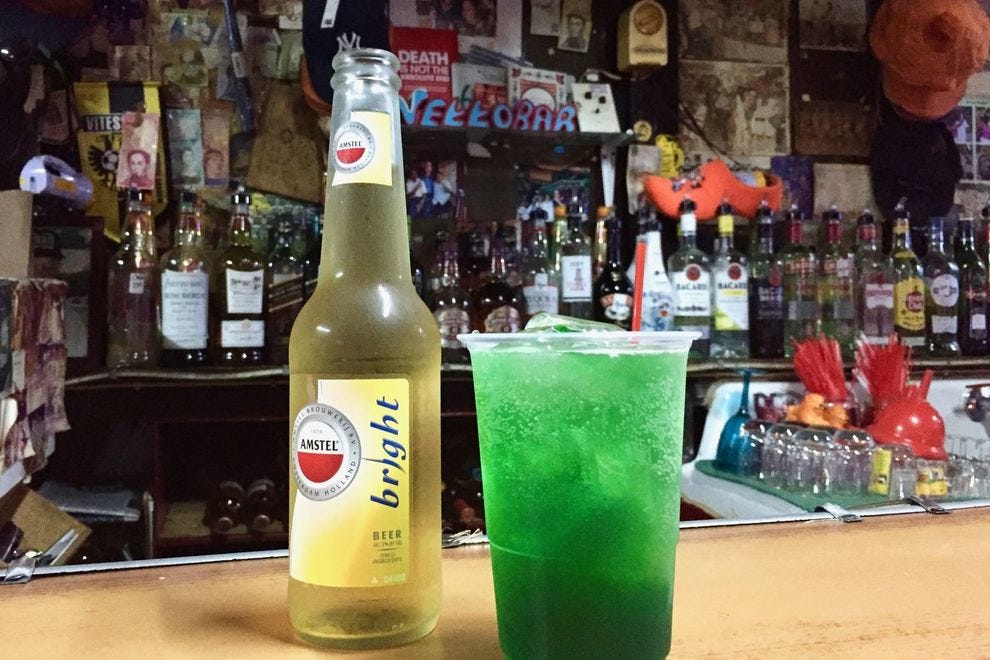 Curacao has a thing for colored alcohol. But unlike the curacao liqueur, the island’s rom berde, or green rum, doesn’t taste like its clear counterparts. Along with its electric color, the rum has a strong licorice flavor.

It’s said to have been invented at Netto Bar, a dive in Willemstad’s Otrobanda neighborhood open since 1954 and decorated in old photos, license plates and images of the Dutch royal family. Ask for it mixed with Sprite, or order a shot if you’re feeling daring.

Museum hires refugees as docents to help visitors see exhibits from a new perspective
Coronavirus cruise ship to undergo major cleaning before April sail
How to see the northern lights (and other inspiring sights) in the mighty Yukon
A YouTuber’s fancy Bali vacation sure looked nice. Nope, the photos were taken in an Ikea
First Look: Frozen’s Arendelle is coming to Disneyland Paris