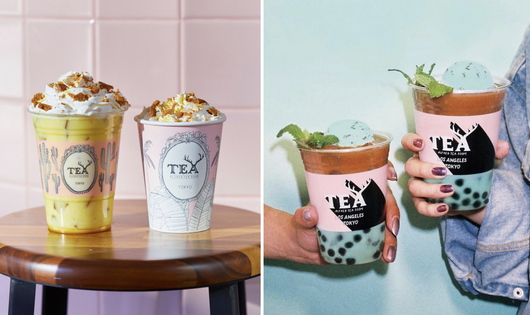 The art of tea has been perfected over the centuries especially in Japan. Japan has literally integrated tea into their culture. So why is an American tea room booming in Japan? It seems strange, but this American tea room, Alfred’s, has found a way to bridge old traditions with new trends in a modern space.

Alfred’s was founded in Los Angeles by Josh Zad as he was in search of a more progressive way to drink tea. Drinking tea has often been a very formal, time-consuming in many cultures. Afternoon tea is at least a two-hour ordeal. But Zad knew that millennials and Gen Zer’s didn’t need a two-hour experience to enjoy tea. Zad opened the first concept on Melrose Place in 2013 and gained instant popularity. Everyone from Justin Beiber to the Kardashians was grabbing tea at Alfred’s. The popularity of the tea room and its sister coffee shop also came from a genius marketing tool- coffee/tea sleeves. Zad initially started by creating Alfred specific sleeve designs, but later gave the opportunity for brands to customize sleeves to get in front of a prime audience at Alfred’s.

“The tea concept was really novel in that we were creating the blueprint looks like. It didn’t really quite exist in the states. There are matcha cafes, high-end tea rooms and boba joints, but there wasn’t anything that made everything fresh in house while bringing the whole world of tea together,” Said Zad. “Within three to four months of being open, we received interest from Japanese developers and investors.”

Zad would frequent Japan to perfect the art of tea for his business so it was to his surprise that he was being asked to open an LA tea room in Japan. He was also surprised they didn’t ask him to open a coffee shop, which he also had, as Americans are more known for their coffee obsessions. “We discovered that Japan’s cycle of coffee is over for them and they are back on tea. Younger generations are now tea obsessed, but do not want all the formalness that typically comes with it. Another reason the Japanese have found our brand intriguing is our pink, but punk Instagrammable in-store design.”

The exterior of Alfred’s in Japan.

Alfred’s brought a high low tea concept to Japan that hadn’t existed before. In a span of two years, Alfred’s has opened 5 locations in Japan with the latest being Tokoyo. At that rate, the brand is growing much faster and is on track to being more profitable in Japan. Zad expanding in Japan has helped him learn how to grow his brand globally while keeping up with the latest trends in tea. “I have learned so many things expanding into Japan, for example, I assumed everything would be driven by Matcha, but the Matcha idolization is such an American thing. The Japanese just expect any tea room to serve Matcha. Which has made us focus into localization and individuality that we have learned to address,” says Zad

Lines of people waiting to order at Alfred’s in Japan.

Zad is continuing to expand in Los Angeles and Japan, but hopes to expand his global presence in the world of tea and coffee. So why are the Japanese all about Alfred’s? Because it’s not just tea- it’s a modern-day experience.

Coronavirus flight cancellations top 200,000, sending jet fuel prices to more than 2-year lows
Most Americans will need a new ID to fly, starting in October
What are the best beer scenes, breweries and bars in the U.S.?
Kyoto launches ’empty tourism’ campaign amid coronavirus outbreak
A passenger said she’s hurt after her reclined seat was repeatedly ‘punched.’ She asked for help, but said a flight attendant threatened her