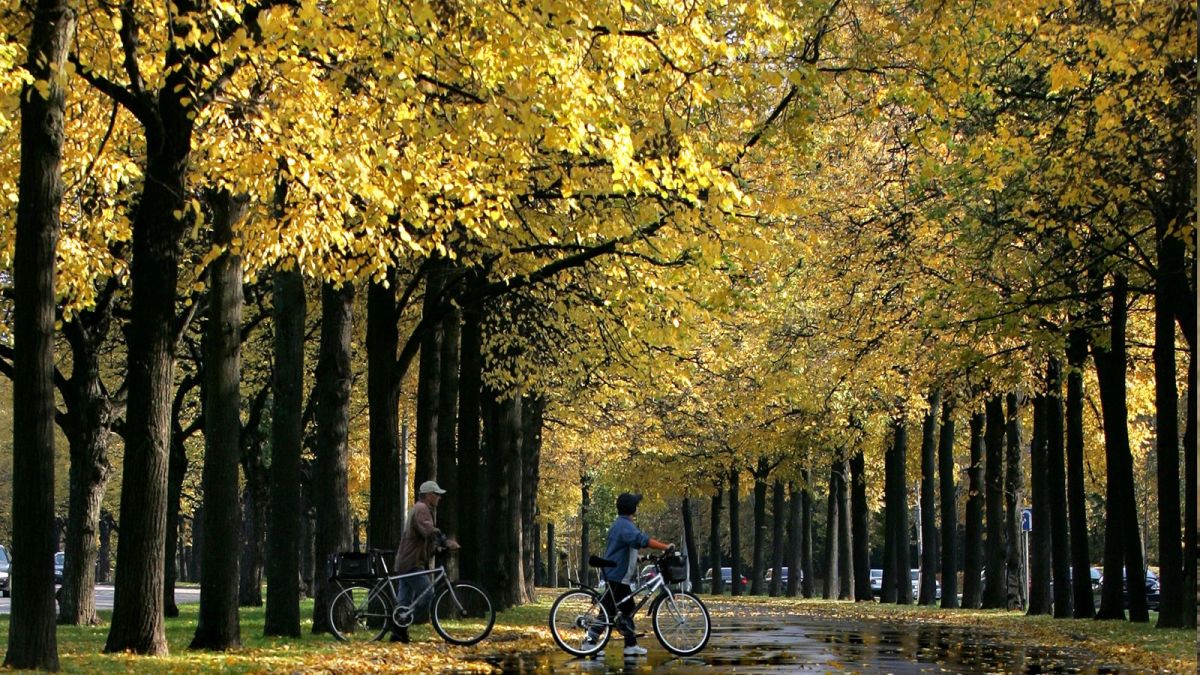 Much copied but never bettered, the original Munich Oktoberfest runs from September 21 to October 6, 2019, and will welcome millions of beer chuggers from around the world.

It’s the world’s largest folk festival — you can tell by all the tourists in dirndls and lederhosen. The fancy clothes get them in the mood to consume millions of liters of beer and tons of pretzels and wurst.

Grizzly bears are active in British Columbia in the fall.

For most of the year, North American brown bears (aka grizzly bears) are shy around humans and can be tricky to spot.

In British Columbia, that changes in autumn when the majestic masters of the forest food chain descend on rivers and streams to gorge on spawning salmon.

From late August until early October, we know of few better places to see this annual feed — and get closeup views of grizzlies — than Bear Camp, where migratory bears join a large resident population in reliable masses.

Located on the Chilko River in central BC, the secluded tented camp built around an authentic 1950s fishing lodge offers rustic luxury along with world-class bear viewing.

In fall, they’re less crowded than in winter high season and hotel rates are considerably lower (with an exception around Thanksgiving).

This comes with a caution: Hurricane season coincides with this slower time in the Caribbean. You should purchase travel insurance and watch the weather reports, especially for places such as the Bahamas, Puerto Rico and Turks and Caicos, among others. But minus a major storm, you’ll likely find fall a superb time to be here.

The ABC islands — Aruba, Bonaire and Curaçao — are close to South America and are on the fringe or outside of what’s considered the hurricane belt.

Aruba has a dry climate and gentle surf. Bonaire is acclaimed for its snorkeling and diving. And Curaçao has a laid-back atmosphere and flavorful cuisine. All were colonized by the Dutch.

Moscow, Russia, is awash in golden leaves during fall.

No country has a patent on trees filled with russet, scarlet and golden leaves. New England in the USA and Japan, including Tokyo, remain heavy hitters in the leaf-viewing game. We also love Douro Valley in northern Portugal, where you can take in the view from a river cruise, explore wine-making villages and try a glass of local port wine.

But consider a trip to Moscow, which has some unexpectedly fine spots for autumn hues. A number of former royal estates have been converted into grand public parks.

Once owned by Catherine the Great, Tsaritsyno Park has superb colors. Kolomenskoye, a 390-hectare estate on the banks of the Moskva River, is another photogenic spot.

Remember, the seasons are reversed in the Southern Hemisphere. So in Chile, they’re heading into the tail end of ski season as the September equinox brings spring. That means travel bargains.

At Portillo resort in the Chilean Andes, many September low-season, all-inclusive rates may dip by thousands of dollars per person per week from high season rates.

Shorter three- or four-night stays are also available late in the season.

Diwali is the Hindu festival of lights. It’s India’s biggest and most spectacular festival, with millions attending firework displays, prayer and celebratory events.

For 2019, the main action falls on Sunday, October 27, though festivities extend over several days.

In Varanasi, incredible fireworks displays explode over the Ganges. In the “pink city” of Jaipur in Rajasthan, there are illuminated markets to explore. In Goa, they burn effigies of the demon Narakasura, with competitions to see who can build the most terrifying one.

Inside Africa explores Lake Malawi which is home many species of fish found nowhere else in the world.

Partly inspired by the Glastonbury Festival, Malawi’s Lake of Stars may lack the big names of the UK’s annual music bash, but it also lacks the mud.

In a decade, LoS went from a low-key dance party on the shores of Lake Malawi to become one of Africa’s hottest music events.

Running September 27-29, 2019, the party typically has an eclectic lineup. DJs are the lifeblood of Lake of Stars, but the real headliner is the location, a palm-fringed shoreline under hot starry skies.

Where else is it acceptable to hang around a parking lot shirtless at 9 in the morning drinking beer and shouting abuse at random strangers the color of whose sweatshirts you don’t happen to approve of?

OK, there’s more to tailgating than raucous revelry and engaging rival fans. Most tailgate events are, in fact, like big convivial communal picnics. But there’s no doubt that the autumn kickoff of football season across America unleashes the nation’s tribal party instincts.

They typically take place on any given Saturday in parking lots outside college football stadiums and on Sundays at pro stadiums. No admission required.

You don’t even have to attend the actual games to enjoy the spirit. A tiny sampling of college and pro games for 2019 to consider:

Tomeka Jones explores a beach getaway full of food, fun and adventure in the Cayman Islands.

The beautiful Cayman Islands, south of Cuba and west of Jamaica, are probably best known as an offshore financial haven and a glorious place for snorkeling. But these three autonomous British islands tap into their colorful history in November with all things pirate.

Melbourne is a standard entry on “most livable city” lists, and its culture and entertainment scene is one of the reasons why people like to be there.

One of the biggest events in the city happens in their spring (and the Northern Hemisphere’s fall). It’s the Melbourne Cup, the most prestigious horse race in Australia. It’s held the first Tuesday of November (in 2019, that’s November 5).

But even if you miss the actual race, you can enjoy all the hoopla, parties and fashions in the days surrounding it.

When you use affiliate links on this page, CNN may receive revenue. CNN is not responsible for the goods or services provided through such links.

National parks could be this summer’s go-to vacation spots
How cork gets from a tree to your wine bottle
The Arctic explorers locked down in a tiny hut in Norway’s Svalbard archipelago
Buy These Stay-At-Home Stocks For The Coronavirus Economy, Market Experts Say
2 New Mexico Restaurateurs Are Adding Fuel To The Fire Under GrubHub