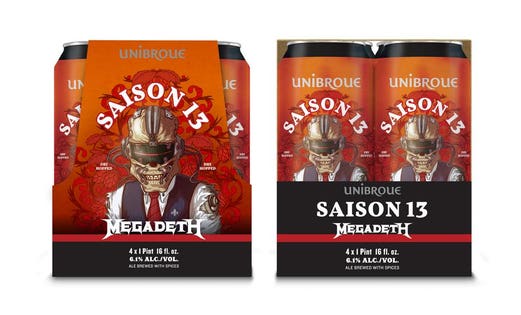 Three years after collaborating with Megadeth founder and frontman Dave Mustaine to make a low alcohol Belgian saison designed to appeal to craft beer newcomers with proclivities for metal music, Canadian brewery Unibroue started selling its second beer with the rock star in the United States Monday. As an homage to the band’s 2011 song, TH1RT3EN, the latest brew is called Saison 13 and uses 13 different ingredients to lend notes of apricot, nectarine and spice. It clocks in at 6.1% alcohol by volume (ABV) and a low 19 International Bittering Units (IBU).

Their first collaboration, a session saison called A Tout Le Monde, still sells year-round, while Saison 13 is available in stores and bars in four-packs of 16-ounce cans and on draught while supplies last.

“Saison 13 contains a series of elements that have meaning to him and to me,” Unibroue Brewmaster Jerry Vietz says in a statement. “Over the years, all of our discussions were a major inspiration for me in the creation and sharing of this new brew; nothing was left to chance.”

In 2015, Mustaine reached out to Vietz, a voracious Megadeth fan and avid guitar player, to co-create A Tout le Monde. By both accounts Metallica’s former guitarist got deeply involved in the recipe-design process.

“He was not a passive member of the project, he’s really a partner and that was exactly what I was looking for,” Vietz told me just before they launched the beer onto the market. “It wasn’t my project it was our project.”

When they released A Tout le Monde, Mustaine said he’d consider doing another, and given that Vietz determined the singer who knew little about brewing at the time liked beers accented with fruit flavors, it comes as no surprise that the Belgian-style brewer would bring similar characteristics to their second collaboration.

Brewer and musician (who owns his own winery) now consider themselves friends.

“(Head brewer Jerry Vietz) takes great pleasure in what he does and we thought it was really a great union,” Mustaine said for this Forbes article in 2016.

In June, Mustaine announced he has a highly treatable form of throat cancer and cancelled most of his tour dates through the end of the year, though he’s planning a winter European tour and continues work on his 16th studio album. Between recording and undergoing cancer treatments, he may not have as much time to devote to crafting and promoting his latest beer, though based on his earlier comments to me, it may just give him a bit of the emotional boost he experienced while making and selling A Tout le Monde.

Colorado Craft Whiskey Distillery Increases Cocktail Sales During COVID-19
7 excellent hotels for a family-friendly holiday in San Sebastián
Which international destinations are reopening to tourists?
Bars Are Reopening, But How Many Americans Are Ready To Venture Out?
9 amazing hotels for the best all-inclusive holidays to the Canary Islands