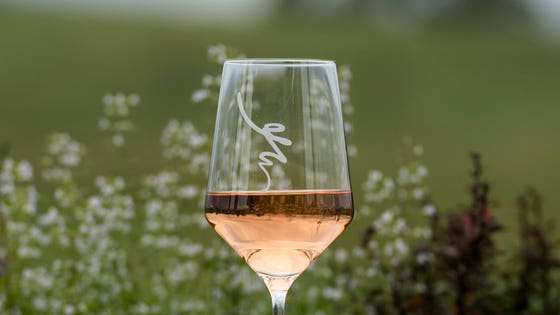 Typically that sentence is spoken from the consumer perspective, typically during warmer weather, as wine lovers around the world enjoy one of the most popular and vibrant movements that the industry has ever known.

This week, it’s been a fun and opportune moment to “rewind” the production of rosé back to the winery and then further back to the vineyard, to explore the decisions that are being made right now that impact the rosé wines that will hit our collective glasses next year.

Earlier this week we considered the perspectives of a winemaker and a grower in Washington state, and today we’ll continue the “tour” north to British Columbia, south to California, then east to Virginia and Pennsylvania, to inquire about the circumstances and driving factors that shape one of the wine industry’s most powerful styles.

A surprising realization during this process? It’s a two-fer, actually: (1) Rosé is a lot harder to make than you’d think yet (2) there are so many ways to get it right.

Here are three key decisions, all about rosé, that you may not have guessed are being made in the vineyard and the winery right now.

Growers and winemakers decide to pick different grapes at different times during the harvest season, depending on levels of ripeness and acidity. Very generally speaking, grapes that are destined for sparkling wine are harvested first, followed by white grapes, followed finally by red grapes.

The timing of harvest for grapes destined for rosé wines, however, varies widely and can fall on any date within that broad spectrum of opportunity. At Little Farm Winery in the Similkameen Valley of British Columbia, for example, Rhys Pender Pender tries to pick early for their Cabernet Franc Rosé, which they’ve been making since 2012. The sequence of harvest on the farm keeps him on his toes: first Chardonnay, which has varied over the years from mid-August to early October; then the Cabernet Franc for rosé a few weeks after the Chardonnay; then Riesling after that.

Further south in the cooler areas of Sonoma’s Russian River Valley, Nicole Hitchcock is the Head Winemaker at J Vineyards & Winery which is particularly known for their sparkling wine production. Their Brut Rosé is a blend of Pinot Noir, Chardonnay and Pinot Meunier grapes, and harvest for those grapes this vintage started a month ago, back on August 13. That’s on track for the winery’s 25-year average, she said, but about a week later than their average over the past five years.

On the East Coast of the US, in Virginia wine country, the team at Early Mountain Vineyards north of Charlottesville have also already harvested most of their rosé grapes. That’s about two weeks ahead of “normal,” according to winemaker Ben Jordan.

Like sparkling, white wines and red wines, the best picking date for rosé wine varies according to geography and climate conditions. Also like the other categories, picking grapes for rosé wine depends on the varietal (Cabernet Franc, Pinot Noir, etc) and the style that the winemaker aims to achieve. Each of these factors adds a different layer of interest and complexity to the decision making process.

The production of rosé wines varies as well. Widely.

From his perspective as a grape grower and as a Master of Wine, Pender has noted a steady move in the direction of drier styles and lesser extraction for rosé. He’s “watched some wineries evolve from off-dry, deep pink, tutti frutti versions to drier, lighter and more savory,” he said. “So they are getting better!”

For Little Farm’s Cabernet Franc Rosé, Pender aims for flavor without too much extraction in both the picking and the winemaking. The team foot-trods the grapes and leaves the the juice in contact with the skin for just four to seven hours before lightly pressing them.

Across the country in southeastern Pennsylvania, winemaker Virginia Mitchell also makes rosé using Cabernet Franc in some vintages at Galer Estate, though she goes back and forth with Pinot Noir depending on the quality of the fruit. That takes precedence in her decision-making process, unlike color which she feels “is like an afterthought because it changes so much in the cellar,” she said.

That a liberating perspective, given the weight that perhaps overburdens some winemakers when it comes to the color or tint of their rosé wine. As a reaction perhaps to market pressure from Instagram-ready consumers looking for what’s been perceived as the prettiest glass of rosé, winemakers are also speaking out about the variability of choice for their own style of wine.

The style of rosé wines varies too. You guessed it — widely.

“Rosé doesn’t mean just one style,” said Ben Jordan of Early Mountain, “and winemakers in Virginia are making rosé from a wide array of grape varieties and with different stylistic goals.” In his case, the team is focused more toward Bordeaux and Southern Rhône varieties, and they tend to blend rather than produce rosé with a single variety like Pinot Noir.

That amounts to a number of different rosé lots this vintage, Jordan said, including direct-pressed Merlot to whole-cluster, semi-carbonic Syrah with a week on the skins.

Those options, and the decision-making process leading up to them, would have been largely unknown even a decade ago. Today, however, they reflect the maturation of the rosé category, and the corresponding evolution of growers and winemakers upping their game.