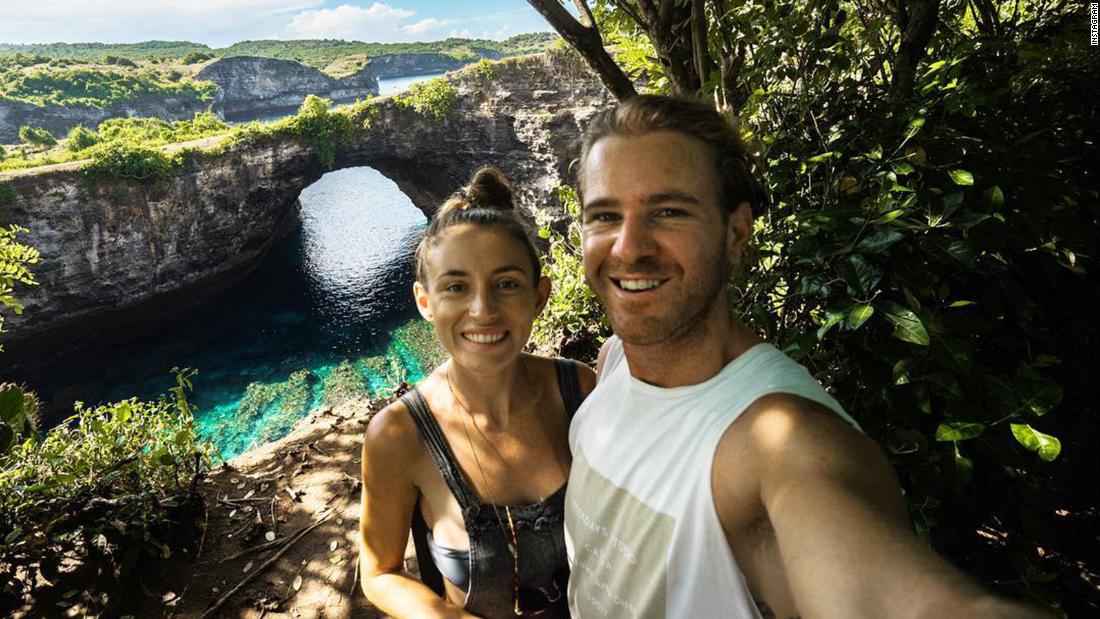 Travel
Share on Facebook
Share on Twitter
Share on Pinterest
Share on LinkedIn
Share on Facebook
Share on Twitter
Share on Pinterest
Share on LinkedIn
In a statement Thursday, Australia’s Department of Foreign Affairs (DFAT) confirmed that Australians Mark Firkin and Jolie King were being held in Iran.
On Thursday, a source with knowledge of the situation said the pair were arrested in July, accused of taking illegal photos with a drone.
The couple often feature drone shots on their YouTube channel, where they have 21,600 subscribers. Their most popular YouTube episode features them driving through the Karakoram Highway in Pakistan and has over 150,000 views.
According to their blog The Way Overland, the couple planned to travel from Australia, across Southeast and Central Asia, and on through to their final destination, the United Kingdom. The pair have also been documenting their travels on Instagram, where they have 19,000 subscribers.
The couple haven’t posted on their YouTube and Instagram accounts since late June. Their last Instagram posts were from Kyrgyzstan. On their blog, the couple said they planned to travel through Central Asia and Iran before heading on to Turkey.
In a statement released by DFAT Thursday, the couple’s families said they hoped to see the pair “safely home as soon as possible.” DFAT is providing consular assistance to the couple’s families.
DFAT is also providing consular assistance to a third Australian national in Iran. According to Australian national broadcaster ABC, she is a British-Australian dual citizen who has been behind bars for almost a year.
In a statement, a DFAT spokesperson urged Australian citizens and holders of dual nationality with Australia who are traveling to or through Iran to follow the government’s latest travel advice.
According to the Smartraveller website, which was updated on Monday, Australia’s latest travel advice for Iran is to “reconsider your need to travel,” due to “the risk that foreigners, including Australians, could be arbitrarily detained or arrested.”
Britain’s Foreign Office wouldn’t confirm the ABC report, but said in a statement that UK Foreign Secretary Dominic Raab had met Iran’s ambassador on Wednesday and “raised serious concerns about the number of dual national citizens detained by Iran and their conditions of detention.”

The detentions come amid tensions between Iran and United States and its allies, including Australia and the UK.
Washington has attempted to use what it calls “maximum pressure” to change Iran’s behavior and limit its nuclear ambitions since the decision by US President Donald Trump in 2018 to abandon the Iran nuclear deal.
Earlier this year, tensions between the US and Iran soared to levels that prompted fears of a war. Oil prices jumped as investors feared that attacks on oil tankers risked a disruption of shipments in the Strait of Hormuz, which passes by Iran and is the most important place on the planet to the global supply of oil.
Australia and the United Kingdom have also become involved in the tensions. Last month, Australia agreed to work alongside the US and the United Kingdom on a maritime security mission in the Strait of Hormuz.

On Wednesday, the UK’s former Middle East minister Alistair Burt described the detentions as a “hostage-taking” during an interview with BBC’s Radio 4.
“The policy of effectively taking hostages, and that’s how it looks, makes it very difficult for those who want a different relationship with Iran to get on the front foot with those who regard it as unremittingly hostile,” Burt added.
During an interview with Sky News Wednesday, UK business minister Andrea Leadsom added that reports of the detentions sound “extremely concerning.”
“Iran once again ups the stakes,” opposition Labour Party lawmaker Tulip Siddiq said in a post on Twitter. “This is a wake up call for our Prime Minister, Government and Ministers that they must act urgently to bring our innocent citizens home.”
Nazanin Zaghari-Ratcliffe, a dual British-Iranian citizen from Siddiq’s constituency in London, has been detained in Iran since 2016 on spying charges.

CNN’s Matt Egan and Hilary McGann contributed to this report.

Are fat fliers being discriminated against by airlines?
Massive sandstorm strands travelers in Canary Islands
Jungle Cruise boat at Disney World takes on water with passengers on board
A YouTuber’s fancy Bali vacation sure looked nice. Nope, the photos were taken in an Ikea
A snowy hot springs where clothing is optional after dark