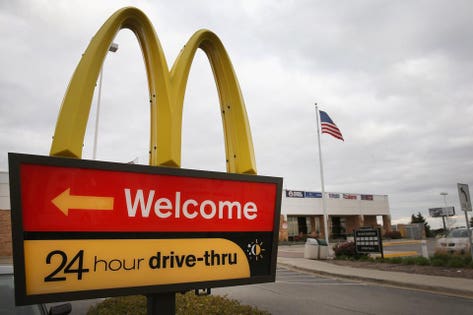 Your drive-through experience at McDonald’s may be about to get more pleasant.

McDonald’s said it made the deal for Apprente, founded in 2017 in Mountain View, California, after “extensive exploration with several parties,” including trying Apprente’s technology in its test restaurants.  The Chicago-based restaurant giant said Apprente’s technology may eventually also be integrated with its mobile ordering and kiosks.

Read: McDonald’s first major acquisition in years could be a game changer

Why the big focus on drive-through? Even though McDonald’s in July reported its four full-years of quarterly comparable sales growth and its U.S. sales performance has outpaced that of domestic industry average, the company admitted it still has work to do to speed up its drive-through service times, key to helping to boost customer visits, which have declined in the U.S.

In a meeting of its global leaders earlier this year, he said they “collectively” agreed that McDonald’s is “going to renew some emphasis on the drive-through service times.” “They’ve been going the wrong way with most of our markets for three or four years for reasons we can understand, as we’ve added more to our business, but we knew that wasn’t a sustaining trend,” he said.

McDonald’s has simplified late night menu and has hosted drive-thru competitions among U.S. restaurants and given them incentives among various moves to come up with best practices to improve its drive-through performance, especially in “critical breakfast” time, Easterbrook said.

Getting drive through right is critical for McDonald’s. While it’s only about 40% of the business of a drive-through restaurant in some European markets, in its top market in the U.S., it represents as much as three quarters of those restaurants’ business, Easterbrook said. Drive through also remains a popular way for many of its customers to order items including Big Macs, Chicken McNuggets and fries, he said in a separate call this year.

“That’s why we’ve never been more focused on improving the experience of the” drive-through, he said. “It’s a global focus.”

Jails to palaces: 10 gorgeous properties that are now hotels
10 unexpected foods to eat on the Caribbean island of Curacao
Let’s celebrate Tallahassee’s past to change the future
The wild wonders of Hatta, the hidden heart of Dubai
The 12 best budget hotels in Bristol, the city where culture and creativity collide