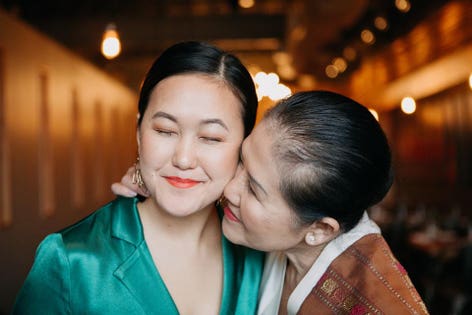 At 11 years old, Vanvisa Nolintha came to the United States from Laos. It was 5 years before she saw her parents again. In that time, she developed a love her new country, as well as a special bond with her brother, Vanthana Nolintha, with whom she’d eventually start one of the Southeast’s most lauded restaurants, as well as a celebrated brewery.

Bida Manda and Brewery Bhavana share adjacent buildings just off Moore Square in Raleigh, North Carolina. They’re definitely worth a visit – interesting places started by interesting people who have a unique and compelling vision for their community.

Vanvisa Nolintha: Just like Van mentioned, my childhood was a great one. Even though our parents worked hard while we grew up, they were family centered and always made time to go to school functions, or even just have dinner every night. I don’t remember as much as I should, but there are still some images I have in my head.

VN: Until I was 7 or 8, my parents had a pharmacy. I remember helping them organize medicine cabinets or counting pills for each order. At the end of the day, my parents would always take us out to eat or have dinner with us. This one night, they took us to this noodle shop. At the end of the meal, they drove us around in this pickup truck we had at the time. Three of us kids would be in the back while our parents were upfront. Van and I and our oldest brother, Vanthana, were in the back just singing. We circled around until we were tired. I still remember the song that came up and the feeling of being kids, and being free.

KG: So there’s a third sibling! An older brother?

VN: He’s back in Laos. He has always been away from home as well. I remember growing up, 7th or 8th grade, he’d go to Vientien to go to a better school and to live with our aunt. He got his bachelor and masters in Australia, and his PhD In Japan. As of now, he’s the only one that has gone back. He owns an international school and works for the government. So he has two jobs, plus a son – so three jobs.

KG: In our interview together, your brother Van talked about the sacrifice your parents made in sending you to the United States. Did you ever feel pressure because of that?

VN: To be honest, I don’t think I felt any pressure until the end of high school. I came to the US when I was 11. At that time, even though it was hard being away, being in America was a cool thing. I was very focused on the day to day, versus Van, who was older. The bigger picture pressured him more. But I didn’t feel it until almost graduating high school and thinking about college.

VN: Just like any other kid, I went through 3 different majors before I found hospitality. I knew I wanted to take care of people, but at first I wanted to be a nurse. But I wasn’t good at chemistry or biology, so I couldn’t do that. So I switched to education. I love kids, I wanted to work in kindergarten or elementary school. And with those two degrees, I could still go home and make something out of it. Then I stumbled upon hospitality and I didn’t actually know it was a major. Going to UNC-G, I was like, Wow, this might be something I want to do. I thought, if I do go home, I could open up a restaurant or little hotel.

KG: It’s my understanding that you actually went back to Laos for a time.

VN: We were supposed to go back home to Laos after my senior year of college, my parents were like, when you graduate, come back that summer. I told my friends and boyfriend at the time that I was going back. I sold my white Beatle and packed my bags. I was supposed to go home and not leave, so I went to Laos that summer being prepared.

KG: But you didn’t stay.

VN: I think it was only a month that we were gone. That’s when Van had the idea for a restaurant in Raleigh. When he told me, I was like, Of course. With my brother? It couldn’t be better than that. We couldn’t be more different. But it worked out because of that. We have our areas of expertise and we respect each other, and each others’s ideas. A lot of time, people say don’t work with your family, but it works for us.

KG: Was it hard leaving your parents for a second time?

VN: When the idea of the restaurant came up, I actually felt very selfish about coming back. I’ve always been confused about where home is, and it wasn’t until recently when my parents came to visit us in Raleigh that I felt like it could really be a home for me. My parents are so supportive. They renovated the house, they made me a room and bought new furniture. They were ready for me to come back. The first time I left I was 11, but I didn’t see them again until I was 16. Those 5 years being apart, I can’t imagine what my parents felt. The sacrifices weren’t just about the financial aspect, but missing birthdays and big life moments with us. I felt like I was disappointing them that we chose to come back and open the restaurant, but now that they’re able to come and see the community we’ve built, they feel much more relief that we’re taken care of. Hopefully they’ll be able to come back and forth every year.

VN: I’m not sure what was going through their minds, but they were so loving and supportive. They didn’t show any sign of disappointment. They said, “Okay, let’s work something out.” With Van being here also and with us doing this business together, they know that we’ll take care of each other. For me in particular, as the younger one, they’ll know Van will always take care of me.

KG: What’s your favorite part of the job?

VN: Definitely meeting and talking with our guests. We’re so fortunate with both restaurants that we’ve created a space that’s not just about, “Here’s a great dish, enjoy.” But, “Let me tell you a story about it.” Meeting new people, when you open up a little, you learn so much. So many lives have come across the restaurant and we get to meet so many faces from different walks of life and hopefully they walk out of the restaurant feeling more love and kindness. The connection is everything, even with people you meet for 10 minutes. It can change you. With me being the front of the house, I’m more on the hospitality side, the hostess side, just by seating people for 30 seconds at a table, you learn so much.

KG: And that’s coming from someone who I understand used to be very introverted!

VN: When we first opened Bida Manda, I was only 23. I still had braces. And being the youngest in the family, I was quiet. It wasn’t until my late 20s that I felt like I was finally becoming myself.

–Interview edited for brevity and clarity.

Three US aircraft shot down during World War II have been found in the Pacific — 76 years later
Travel back in time at one of these 11 historic English pubs
Is it safe for travelers to visit Italy?
9 ways to make airlines and airports better
Learn how to make pasta on a gorgeous rooftop in Rome