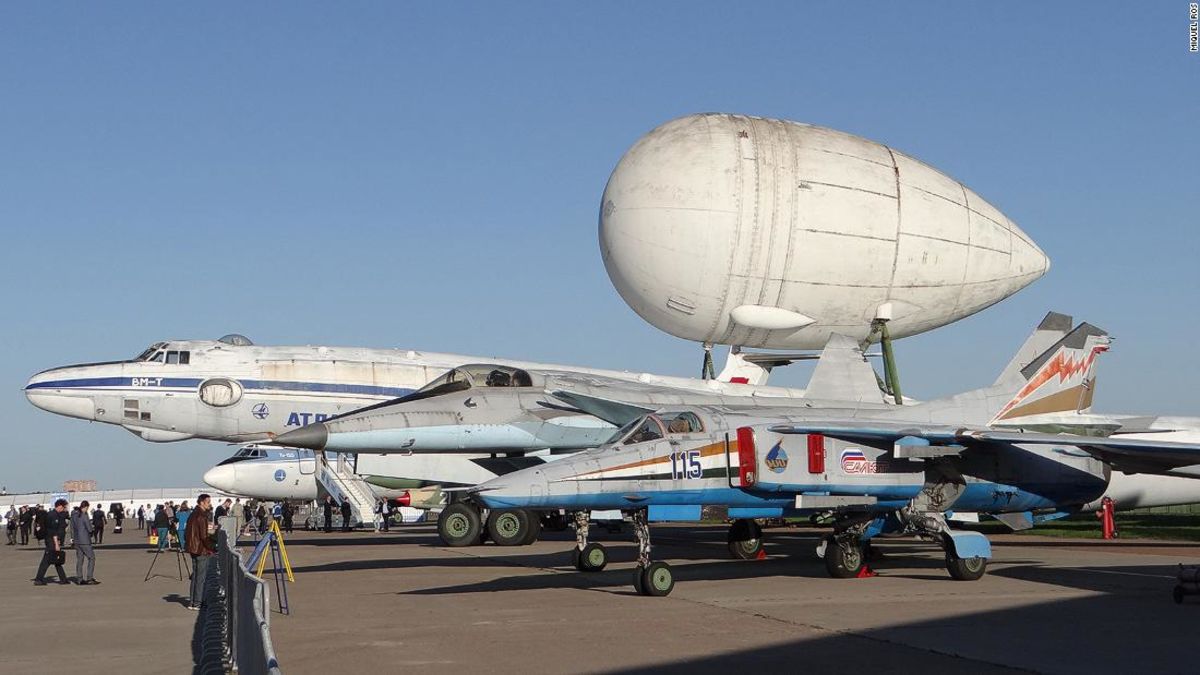 (CNN) — Its drooping, pointed nose and elegant fuselage instantly marks it out as a supersonic plane. But the majestic aircraft parked on a roundabout in Russian suburbia isn’t, as you might assume, a Concorde.

It’s a Tupolev Tu-144, known as the “Soviet Concorde,” which debuted in 1968 from the airfield here in Zhukovsky, and was withdrawn from passenger service in 1978.

It would be hard to find a more appropriate landmark to welcome the thousands of aviation professionals and enthusiasts from all over the world who, every other year, descend on Zhukovsky.

Thirty miles southeast of Moscow, this is a city that breathes aviation through and through.

Since the mid-20th century, Zhukovsky has been at the heart of the Soviet, and later the Russian, aerospace industry — in fact, it was expressly developed from a small town into an aviation city after World War II.

Even today, most Russian aeronautical research institutes and their support industries are based around its airport — which is home to the second longest runway in the world in public use. Outside the airfield, old Soviet planes are still parked alongside the wide, tree-filled avenues.

All this makes Zhukovsky the natural setting for Russia’s top air show: MAKS.

It may not be as large as London’s Farnborough and Paris’ Le Bourget air shows and it doesn’t draw as many people as EAA AirVenture Oshkosh, in Wisconsin, but there is something special about MAKS.

Russia has one of the world’s few remaining self-standing aerospace industries — and it’s a direct successor of the research that sent the first man into space, and for decades challenged the West in aircraft design and manufacturing.

Although the Russian aerospace industry has never fully recovered from the impact of the collapse of the Soviet Union, particularly when it comes to civilian aircraft production, in recent years it has tried to reassert itself as an independent player by launching a number of brand new aircraft.

The Irkut MC-21, a Russian single-aisle twinjet airliner, made its debut at the 2019 show.

This year’s MAKS, held August 27 to September 1, debuted a new mid-sized airliner, the Irkut MC-21, which aims to compete with two industry all-time bestsellers, the Boeing 737 and Airbus A320. In its standard version, it’s able to seat between 163 and 211 passengers. It made its MAKS appearance following more than two years of testing, taking part in the flight display. A limited number of visitors were also able to get on board to get a first feel of the aircraft.

But challenging global giants Boeing and Airbus on their own turf isn’t simple. The only other commercial airline launched by Russia since the demise of the Soviet Union is the 100-seater Sukhoi Superjet, which started commercial flights in 2011 — but it’s been plagued by reliability issues.

Then, in a separate incident, 41 people were killed in May 2019 when an Aeroflot Sukhoi Superjet burst into flames after an emergency landing at Moscow Sheremetyevo. To date, few foreign carriers have ordered it.

Does the MC-21 stand a better chance?

“Technically the MC-21 looks attractive, but much depends on its acceptance in the Russian market, the geopolitical arena becoming friendlier to Russia and a successful global support network being put in place,” says Chris Seymour, head of market analysis at Ascend by Cirium, which monitors the global aviation market.

So far, the MC-21 has collected 175 firm orders, with the largest coming from Russian state-owned carrier Aeroflot, which has ordered 50.

The 2019 Cirium Fleet Forecast predicts just under 800 orders for the MC-21 over the next 20 years, with over half coming from Russia and the CIS (Commonwealth of Independent States, formed by 10 former Soviet countries). Seymour says the rest will likely go to Asia-Pacific, Africa, Latin America and the Middle East, including countries where Russia holds some degree of political influence.

In the wider international market, however, the dominance of Airbus and Boeing will be hard to break. Even if there was room for a third entrant into the market, Russia could be overtaken by China, which is soon expected to launch its own rival, the Comac C919.

A collaboration with China

A dedicated pavilion hosted a real-scale mockup of the cockpit and cabin, displaying some of the concepts that are being touted for this aircraft. Everything is still very speculative, though, since the final design and fittings have yet to be decided. Passengers are unlikely to fly on it before the middle of the next decade.

But MAKS is also an international show, and current geopolitical tension didn’t deter major international players such as Airbus, Boeing and Embraer from taking part.

Airbus’s contribution this year was an A350-900 aircraft — a version of its popular long-haul aircraft the A350, which Aeroflot is inducting into its fleet early next year. Besides being an opportunity to showcase its flagship product ahead of its arrival in the Russian market, the plane also boasts Airbus’s “connected cabin” concept — a sophisticated technology package that uses the huge amount of data generated on board the aircraft in order to improve both operational efficiency and passenger experience.

Applications can be built for this digital platform, allowing airlines to monitor in real time the performance of key aircraft components (and detect issues well in advance). They can also move airlines closer to the ideal of personalized service — for example, offering different lighting settings for business class seats, allocating space in overhead bins (by detecting how the remaining space is distributed) or helping crew manage their on-board food and drink stocks.

The Myasishchev VM-T stands out due to its distinctive bubble.

Not that the passenger planes are the main focus here. All major air shows have a military component, but at MAKS, this display of Russian-made weaponry and systems takes center stage.

Russia’s fifth-generation fighter jet, the Su-57, caught the eye of Turkish President Recep Tayyip Erdoğan when he was escorted round the show by Vladimir Putin this year.

MAKS concentrates on the latest and most advanced models of fighter jets, but there is also space for other interesting concepts, such as the Beriev Be-200 amphibious jet-powered aircraft as well as for helicopters in all shapes and sizes.

The airshow’s static display — lines of planes for visitors to walk around and see up close — incorporated Zhukovsky’s historic collection as well as the modern jets. Among them was a collection of old Cold War warriors — some of them still active, such as the Tu-95 and Tu-160 bombers that are still sent regularly to poke around NATO air defenses.

There’s also a line of Ilyushin 76 cargo aircraft whose famous glass noses aid navigation. This is a polivalent jet-powered cargo aircraft that can be fitted for different types of missions. One of them, present at the show, is specially adapted to generate “zero gravity” conditions during flight, and is used to train astronauts at the Gagarin Cosmonaut Training Center.

Added to this eclectic display are some of the most unique creations of the Soviet aircraft industry’s past: another Tu-144 “Concordsky,” and next to it the bizarre-looking Myasishchev VM-T, a modified bomber with a huge metal “bubble” protruding from the top of its fuselage. Only two of these were ever built — designed with the purpose of ferrying rocket boosters and Soviet space shuttles between cosmodromes before their space flights.

MAKS is a great place to gauge the current state of the Russian aerospace industry and get a glimpse of its future — but it’s also an absolute must for those interested in its past.

Are fat fliers being discriminated against by airlines?
On the trail of African American writers and artists in Paris
Three US aircraft shot down during World War II have been found in the Pacific — 76 years later
A snowy hot springs where clothing is optional after dark
Jungle Cruise boat at Disney World takes on water with passengers on board