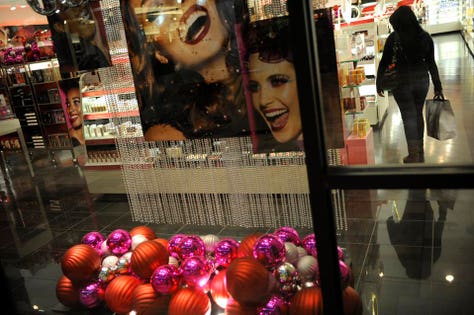 With the growing U.S. population of prime-working age women who are single, a study finds retailers from Nike and Lululemon to TJX and Sephora are poised to be among the biggest beneficiaries of this group’s spending appetite.

Among total female population over the age of 15, the percentage of single women by 2030 will outpace that of married women and rise to 52% from 49% last year, the study, based on Census Bureau data, reports Thursday.

What’s behind that growth? It’s not just because women are getting married later or the divorce rate among those over 55 is increasing. Never-married women actually represent the fastest growing segment of the female population, the study finds.

The report shows single women outspend the average household on a per-person adjusted basis in categories including fashion, restaurants and personal care products, putting those retailers having a hold on this demographic potentially in the sweet spot.

“Annual expenditures driven by single women should grow disproportionately to other spending cohorts,” the study says. “The rise in labor force participation and closing wage gap should further influence this divergence.”

Athletic names like Nike, with an increased pitch to women, and Lululemon, which already counts on women for 70% of its sales, are poised to benefit from this trend because both single men and women tend to spend more time exercising more than their married counterparts, increasing the need for workout gear, according to the study.

Off-price retailers like TJ Maxx and Marshalls parent TJX and Ross Stores also could benefit. Women already represent more than three-fifths of their respective customer base, and single women, earning less than their married counterparts and more willing to spend on clothes and shoes, appreciate the name-brand discounts and treasure hunting environment offered by off-price retailers.

In the restaurant space, fast-casual chains like Chipotle and coffee-house giant Starbucks, both with women already over half of their customer base, should also be able to capitalize on the shift. “Starbucks is already popular with women,” the report says. Chipotle has “both a healthier image vs. most limited-service restaurants and relatively high exposure to urban, professional customers. We’d expect this to remain an advantage as single women increase spending power.”

With single women’s spending on personal care products almost equal to the total amount spent by a household with an average of 2.58 individuals, beauty companies Sephora, Ulta Beauty and Estee Lauder — each already counts on women for over 75% of their business— are poised to be also among the beneficiaries.

Beauty products will likely see some of the biggest boost in demand as Gen Z, who spend more on makeup than any other generation did at their age, grow into their prime spending years, the study says.

Related on Forbes: Can Victoria’s Secret get its sexy back? The jury is still out

Related on Forbes: Starbucks is taking a page from Amazon with a new investment

A miniature service horse finally flew on a plane after months of training. It could be the last time
The wild, colorful times of Carnival are here again
Most Americans will need a new ID to fly, starting in October
Born again: Decommissioned airplanes get a new lease on life
Coronavirus cruise ship to undergo major cleaning before April sail