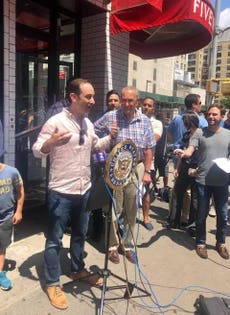 Earlier this year it was reported that Grubhub, the mega-sized restaurant delivery company, was charging restaurants bogus fees for phone call orders that customers did not place. The way it works is Grubhub would setup and promote a unique phone number for restaurants listed on their platform. Apparently, when a customer called a restaurant using that number and the phone call lasted longer than 45 seconds, Grubhub would assume an order had been placed, and they took credit for it. The problem is that customers often call restaurants to make reservations, ask about the status of an order, or other reasons unrelated to ordering food. Unsurprisingly, their system resulted in restaurants being charged with bogus fees. One New York City restaurateur reported being charged more than $10,000 by Grubhub. Another restaurateur from Philadelphia filed a class-action lawsuit against the company over its fees.

When news of the charges broke, you’d think Grubhub would apologize profusely to their restaurant customers, reimburse all the bogus fees and announce that they’d work to fix the system that’s at fault. Instead, what followed was a textbook lesson of what a company should not do when their questionable business practices are exposed, and they face public and political outrage. They doubled down, refused to be accountable, and criticized the press and others who exposed their unfair tactics. This strategy resulted in journalists further investigating the company. The restaurant industry’s outrage at the company, which long bubbled under the surface, finally boiled over.

New York City Council Member Mark Gjonaj held what has been noted as the first of its kind oversight hearing into restaurant delivery platforms. I testified alongside restaurateurs on behalf of the organization I run, the New York City Hospitality Alliance, a not-for-profit industry group that supports restaurants. I was astonished by how many restaurateurs told me they were too fearful to testify publicly against Grubhub because the fear of retribution, such as their restaurants not showing up easily in the platform’s search results. And, while the fear of retribution is probably overstated, it shows how much real or perceived leverage the billion-dollar corporation has over restaurants.

Some restaurateurs told me that they can lose money on individual orders because Grubhub charges a 15% to 30% fee on the total order amount, which is higher than their restaurant’s profit margin. They told me they only make money off larger catering orders that the platform generates. Grubhub tried to justify their high fees at the hearing by saying they generate incremental sales to restaurants. That’s not a total lie, but in context, it’s not the truth either. In cities like New York, customers often use websites like Grubhub because they make it seamless (coincidently, Seamless is the name of a restaurant delivery company they also own) to order from their favorite restaurants, and not as a platform to discover new restaurants. There’s a good argument that Grubhub actually benefits from incremental sales due to restaurants’ own marketing efforts and built in customer base. In markets like New York City, the company processes the orders and does not usually deliver the food, so the restaurant must still pay their own delivery workers or a third party delivery company.

Grubhub’s situation turned grimmer when government agencies were called on to investigate their actions, including the attorney general, for potential anti-competitive behavior. New York’s attorney general has already intervened in Grubhub’s past business practices over fees the company charged, exclusive agreements, acquiring their competition and consolidation of marketshare. The New York State Liquor Authority then issued an advisory they were considering for some time, that if adopted, would limit the fee to 10% that third party companies could charge liquor licensed establishments that aren’t listed on that restaurant’s liquor license. And this past July, I participated in a press conference with U.S. Senator Chuck Schumer who called on Grubhub to pay restaurants back the bogus fees and asked the company to cooperate with the U.S. Small Business Administration’s probe into their business practices. The Senator’s involvement helped get the company to acknowledge that something is rotten.

After Grubhub’s July earnings call with shareholders, when their stock lost value, they defended their business model but then announced they’d extend the look-back period for restaurants to review all phone orders from 60 to 120 days and refund those illegitimate fees. They said they’d deploy a website that makes it easier for restaurants to request direct control of any URL or microsite they setup for restaurants. Grubhub claims they had consent when purchasing URL’s and creating websites for restaurants as a service, but this has still been criticized as a form of cybersquatting, a controversial practice when someone else essentially highjacks a company’s online identity for their own benefit. Their practice, which they say they no longer engage in, gained the company market share and leverage over their restaurant customers. The company will also set up a series of restaurant roundtables to foster more dialogue with their restaurant customers, which I’m wary is nothing more than a public relations ploy, so if restaurants choose to participate, I suggest they do so with skepticism and caution. I hope I’m wrong.

Grubhub’s announcement is a step in the right direction, but it is a small step, and much more must be done. Extending the look-back period from 60-120 days to refund bogus fees is absurd. If Grubhub charged a restaurant a bogus fee 300 days ago they must still refund it. There should be no time limit on look-back periods. Placing the responsibility on small business owners to review recordings of their phone calls to determine which ones they were improperly charged fees for, pours salt in the wounds. Grubhub should hire an independent third party to review all phone calls to determine if an order was placed. If an order was not placed, Grubhub should reimburse the restaurant the fees they charged, it’s the right thing to do. They should also fix the system that’s at fault for the bogus fees.

Finally, Grubhub should stop calling restaurants that use their platform their “restaurant partners.” Restaurants are not Grubhub’s partners, they are customers.

In places like New York City where local restaurants are facing unprecedented challenges and vacant storefronts are all over, people who use Grubhub to order from their neighborhood restaurants should consider how the company’s high fees and business practices hurt their favorite dining spots.

We know Grubhub can process a lot of restaurant delivery orders. Let’s see if they can deliver restaurants their money back, along with a side of more fair and equitable business practices.