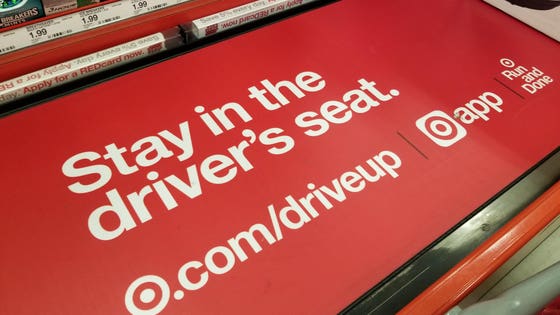 As Amazon is busy plowing money to make free Prime one-day shipping the new norm, results from its major rivals Walmart and Target suggest their much-larger brick-and-mortar store fleet is proving to be a key weapon against the online giant.

Target stock surged 19% on Wednesday to top $100 in its record-high after the No. 2 U.S. discounter reported better-than-expected fiscal second quarter profit and raised its outlook. That followed a similar upside surprise from larger rival Walmart last week even as the industry still faces an uncertain outlook over the U.S.-China tariffs war.

One common theme in both retailers’ results? Store-aided online demand.

Target said its comparable-sales in the quarter that ended Aug. 3 rose 3.4%, contributing to that metric’s best two-year performance in more than a decade. A 34% surge in online sales accounted for almost half of the increase, thanks to customers picking up online orders in stores, driving up to Target parking lots to have their orders loaded in their cars as well as its Shipt same-day delivery service.

Those three alternatives together have more than doubled their sales in the last year to more than a third of Target’s online total from 20% a year earlier, Target Chief Operating Officer John Mulligan said on a conference call Wednesday.

“Our same-day options are growing much faster than our digital sales,” he said, adding those three choices combined drove most of the quarter’s online growth. “They’re becoming the go-to-choice for (customers’) digital shopping. They are immediate. They allow guests to shop and receive their order on the same day.”

They also solve a big pain point increasingly facing the online economy. “It eliminates the need to deal with opening and recycling a stack of cardboard boxes every week,” Mulligan said.

What’s perhaps even more relevant is this: The potential to lower costs especially after Amazon’s higher one-day shipping costs led partly to its disappointing Q2 results in July. Target’s Mulligan said same-day options capitalizing on Target stores and its employees are the most profitable within its online offerings.

“Target has been starting to bend the curve on fulfillment costs,” Grom said.

Target, which has more than 1,800 locations, also has been remodeling stores and is doubling down on its own line of stores brands to differentiate its merchandise and lure customer traffic. The company said this week it’s unveiling its biggest private-label line, Good & Gather food and beverage items, as the retailer has lagged behind major rivals in grocery retail market share. The category is a key battleground that major retailers from Walmart and Amazon are also focusing on to get shoppers to open their wallets.

Walmart also has been tapping into its nearly 4,800 U.S. stores that the company said are within 10 miles of the 90% of the U.S. population. Walmart U.S. last week also reported its best two-year comparable sales performance in more than 10 years. Online sales in the retail giant’s largest business jumped 37%, contributing to half of the 2.8% comparable increase Walmart U.S. posted.

Walmart, which ended the quarter with more than 2,700 grocery pickup locations and more than 1,100 stores that offer same-day grocery delivery in the U.S., credited “strong growth in online grocery” in its performance.

Related on Forbes: Why Target is making its biggest private-label bet on grocery

Related on Forbes: Amazon’s retail rivals are happy to work with it, as AWS clients

Related on Forbes: New York proves Amazon Go works, and a bigger rollout is only a matter of time